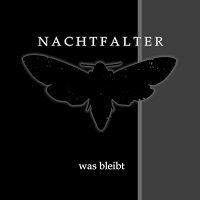 They play gothic/industrial metal and sing in their native German… they must be Rammstein clones, then, right? Wrong! Because that description is where the similarity between Nachtfalter and their much more famous, and notorious, countrymen, ends. And with an emphatic full stop.

For where Rammstein rely, by and large, sheer bombast to get their point across, Nachtfalter – or Moth, as they themselves translate their name – tread a much darker path, pulling together elements of gothic noir with symphonic black metal a la the likes of Children Of Bodom, thrash and, almost inevitably, given the industrial footing of much of the material, EDM. And they also manage to do all of this in a way that comes across as cohesive and thoughtful, not an ill-conceived mash-up of styles thrown together to see what sticks. Rather than bouncing from mien to mien in some sort of slapdash hurdles race, the album’s nine tracks (I’m not counting the electronic remix of ‘Maschinenklang’ appended to the end of the running order in this assessment), flow elegantly and eloquently with the inevitability of the Elbe coursing its way into the North Sea.

What helps in this regard is the repetition of various musical themes throughout the course of ‘was bleibt’ (or ‘what remains’). For example, the dolorous cello which dominates the opening intro piece of ‘Für Mich’ re-emerges in the equally doomy piano of epic closer ‘Nur noch einmal…’, which in turn also echoes the fury of just released second single ‘Anderes Leben’ in the ferocity of its second half, while the electronic theme of lead single ‘Maschinenklang’ is similarly reprised on ‘Nacht’.

‘was bleibt’ is billed as being something of a labour of love by its two protagonists, vocalist/composer Tobias Serfling and guitarist Tom Günzig, who themselves have been kicking about the German metal scene for more than 20 years, their paths occasionally crossing and eventually drawn together by their collective desire to produce an album which reflected their mutual love of gothic metal. The result is highly impressive and definitely deserves so much more than those lazy, pat Rammstein comparisons to which so many critics will resort. ‘was bleibt’ is rich, dark and generous in equal measure. If you like your gothic noir with an industrial undertone but a danceability to its grooves, then you’ll be clicking on the link immediately below right away…