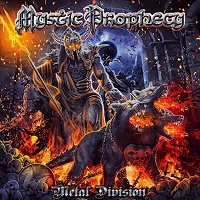 Well, this one’s awesome. ‘Metal Division’,the eleventh album from German veterans Mystic Prophecy is joyous from start to finish. It’s a fist-pumping, rip-roaring, life-affirming belter of an album, full of skyscraper vocals and hard-hitting guitar riffs. It sounds like what it is; high quality metal recorded by seasoned professionals who still love their chosen genre and want everyone involved to have a good time. So, while it’s only early January, there’s a real risk that we’ve already heard one of 2020’s most enjoyable records.

Which is all the more remarkable given that they’re not exactly a major force in power metal, even with twenty years under their belts. They’re not exactly unpopular, but they’re hardly challenging the likes of Powerwolf or Sabaton for headline spots and chances are only the most die-hard fans on this side of the channel even know they exist. Hopefully ‘Metal Division’ will change that and they’ll finally start attracting bigger audiences, rather than just being known as another band that Gus G once spent time in.

One of the most striking things about it is how damn heavy it is. Power metal usually makes you think of enchanted castles and fantastical lands, but just try listening to ‘Curse Of The Slayer’ and see how long you can last before itching to start a circle pit? There’s a major thrash-influence here and the whole thing surges with vitality. It’s not particularly challenging but if you want to get yourself pumped up before your UFC debut, this’ll do perfectly. The closest comparison would be Arthemis, the similarly-underrated Greek band as both acts write upbeat, modern power metal with dirt beneath the fingernails. Sure they’ve read all of David Gemmell’s back catalogue, but they can also drink you under the table and know karate.

Then there’s the recent ode to the Granddaddy of the undead, ‘Dracula.’ It’s already online and we’d recommend checking it out as quickly as possible; it walks a perfect line between melodic and heavy, while singer Roberto Liapakis delivers a crystal-clear vocal performance. He may well be the star of the album in fact, he packs some serious pipes and makes even the faster numbers like ‘Together We Fall’ instantly accessible.

Elsewhere, there’s a song about Alexander The Great (‘Hail To The King’) and a brilliantly silly tribute to heavy metal (the title track) which keeps the mood light-hearted, plus a whole load of future fan-favourites like ‘Die With The Hammer’ and ‘Here Comes The Winter.’ Truth be told though, there’s not a duff moment in the entire track listing. This is Teutonic power at its most testosterone-laden and its so energetic it’ll make your head spin. Nothing pretentious and no navel-gazing, just non-stop head banging and all the better for it. This is bloody great and it’s got the decade off to a riotous start.