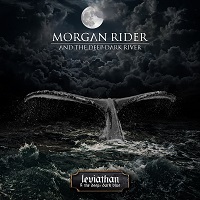 Morgan Rider may well be better known to death metal fans as the frontman of Toronto’s Vesperia, with whom he has released two albums. While sonically completely different from the territory he inhabits with the project, his solo offerings share strong thematic links, especially in relation to their connectivity to the environment. As its title suggests, this is the second in a series of four inter-linked albums, a sweeping concept set within an alternate timeline and dimension of Earth, including its geologic history and eras of human civilization. The stories contained within the Deep Dark River albums, as with those by Vesperia, are peripheral to a book series Rider has also been writing for the last nine years, and for which he is currently seeking a publisher.

The story which ‘Chapter II…’ tells is essentially an analogy for climate change, and especially the impact of man upon his environment and his neverending intention to kill or destroy that which he does not understand, telling as it does the story of the “Ocean God”, the “leviathan” of the title, and the “shore dwellers” from whom he seeks to protect his realm before paying the ultimate price and perishing in the “deep, dark blue” of his domain… As the story suggests, the musical landscape which Rider paints is suitably bleak and nihilistic, totally alien from the technicality of his DM background but yet possessing the same dark characteristics with which many will identify.

It is also a surprisingly heavy album: not in terms of the likes of Mastodon, who have explored similar thematic territory, but in the sheer weight of the sonic gravitas which it brings to bear. Dolorous cellos moan and lament behind guitar riffs which broil and crash like Atlantic breakers against granite cliffs; acoustic guitars and mandolins build layers of brooding atmosphere before songs like ‘Dread’ and ‘The Seafaerers’ explode into vibrant yet dense life, then retreat back into the overall melancholia which pervades the album. All the while, Rider’s rich, sonorous vocals tell the story with a rarely possessed intensity and sensuality which is as hypnotic as it is forthright.

‘Chapter II…’ itself is split into two parts: the main body of the album, seven tracks which tell its story with a barely restrained fury, and then acoustic interpretations of the five songs which make up the lyrical essence (the first half is bookended by two instrumentals). These latter reflections contain their own power, made all the more cognisant and impressive by their stripped back nature, which in turn define the clarity of purpose behind the project. The result is an epic album which will appeal to fans of the dankest black metal as much it will to those of folk music, as it ploughs a dark furrow somewhere between the two, possessing as it does the atmospherics of the former and the story-telling ability of the latter. Quite an achievement, and one beautifully realized.