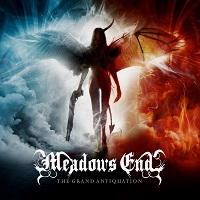 Initially formed in the late Nineties, symphonic death metal band Meadows End have had a rocky journey to where they are today. Inactivity and line up changes stalled the project following demo releases in the early 2000s. 2010 saw stability return and the band released their debut album ‘Ode to Quietus’. Interest in the band grew along with a social media presence and 2014 saw second offering ‘The Sufferwell’ being released. As they established themselves further, Meadows End reworked and released their early demo work in the form of album ‘Sojourn’ in 2016. Using their, by now solid social media presence, ‘Sojourn’ was released track by track each month via the band’s YouTube channel. In this way the band built up further interest in their music as well as creating a sense of build up for their pre-existing fans.  What does album number four, ‘The Grand Antiquation’, have in store?

‘Devilution’ kicks things off with a grand orchestrated sound. A choir backed by a wall of instrumentation coupled with pounding drums and chugging guitar riffs sets the tone. When the guttural vocals kick in the sound of the band is well established. Despite the texture of the track being so thick what with the orchestra, rhythm section, guitars and vocals in the mix. Each instrument can be clearly identified and there is nothing messy about the music. The whole track shifts dynamically and swells but it retains a clear sense of direction and is undeniably heavy.

A staccato introduction gives way into a full band assault for ‘Storm of Perdition’. The listener is immediately bombarded by the attacking vocals and pounding drums accompanied by the orchestra and guitars.  Despite the aggression and stop-start structure, there is a melody hook to be found that keeps pace throughout up until the breakdown. The texture thins to allow a duet of acoustic arpeggiated chords and electric guitar solo to come to the fore ground and project a moment of calm amongst the swirling mass of heavy metal power. The full band re-joins together for the final stage of the track and the staccato style of the orchestra draws the music to it’s close.

As the album progresses Meadows End firmly establish their sound and the feel for the album. It’s all in heavy metal with memorable melodies, particularly on the track ‘Non-Dreaming Eye’. Using a tapping technique, the guitars provide a catchy melody hook to work with the rhythm section and pull the listener in before the full band plus orchestra comes in creating a symphonic blend with the heavy onslaught. With the concept of thick textured symphonic melodies and aggressive heavier rhythms coupled with punishing vocals, the latter half of ‘The Grand Antiquation’ continues on relentlessly. ‘The Insignificance of Man’ features a call and response style vocal pattern between a cleaner female voice and the guttural male style that has gone before. The dynamics shift down at the mid-point of the track and a solo piano melody takes the fore, this opens the track up before the full band assault returns building into a thick textured crescendo. ‘I Stilla Vemod Vandra’ brings the album to a close. Rounding off the album by combining all of the techniques and instrumentation that has gone before, it brings the music full circle. With the acoustic guitar fade out, it feels like a deep exhale after the frantic energy that preceded this track.

Overall, ‘The Grand Antiquation’ is a great piece of symphonic death metal. The eight tracks highlight all the good techniques and music styles of the genre and the technical musicianship on offer is of a very high quality. For guitar fans there’s a number of stand out moments in the form of ‘Non-dreaming Eye’ and ‘Svept I Sorgeplad’, the drumming and bass guitar throughout is excellent as the rhythms never let up nor cease to provide a heavy metal power to the music. If there’s criticism to be found it’s that occasionally it feels like ideas have been repeated and that there is not enough difference between each track which can lead to a murky blending of tracks. However, the fact that there is undeniably talented musicianship, as well as great music on offer this is a good album and worthy of a place in any symphonic metal fans collection.