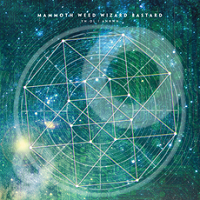 Mammoth Weed Wizard Bastard have always been something of an ethereal beast. Existing on the outer-edges of modern doom’s experimental, drowning-in-atmosphere sonics, the band offered a sense of overwhelming emotion which threatened to drown listeners with each crashing wave. Returning with ‘Yn Ol I Annwn’ (Welsh for ‘Return To The Underworld’), the band are reaching out further than ever before – with one crucial twist. As opposed to going deeper into the mire of doom atmospherics – as so many of their peers have – MWWB have cast their eyes to the heavens, going intergalactic with the introduction of moog synthesisers and cosmic soundscapes to push their boundaries further than ever before.

From the get-go, ‘Yn Ol I Annwn’ exists outside the continuity of what came before it. The synth heavy vibes of ‘Tralfamadore’ pitch the record into John Carpenter like territories, fading out right into Sci-Fi heavy moog tones on ‘The Spaceships of Ezikiel’, taking almost three-full minutes before the traditional sounds of doom come in. From here it’s business as (un)usual for MWWB, combining grinding riffs with airy, spiritual vocal melodies to great effect. Ever-expanding, the band make use of their latest sonic additions to further fill in the sonic landscape they create, even going so far as to incorporate a synth-solo into proceedings.

Far as the band take things into the aether, they exercise enough editorial shrewdness to bring everything back to earth when needed. ‘Fata Morgana’ is about as traditional as this band get – its haunting guitar lines an evolution of ‘Solitude’ style Sabbath fare, or ‘Scream of the Butterfly’ by Acid Bath. Paired with Jessica Ball’s thick, soulful vocal, the track is pure doom, particularly when it decides to truly kick in just past the five-minute mark.

The closing act of a trilogy which began on ‘Noeth Ac Noeth’ back in 2015, ‘Yn Ol I Annwn’ already has to follow on from two of the most distinctive releases in the modern doom canon. Luckily, you’ll find all of the hallmarks of MWWB’s brilliance in this record, with an added caveat that the introduction of cosmic themes has given the band a greater dichotomy between their most experimental tendencies and straight-up doom riffing. This is most powerfully felt on ‘Du Bist Jetzt Nicht in der Zukunft’; a track which almost completely disposes of the standard doom-fare of guitar, bass and drums, replacing them with haunting cellos and ‘80s style synth, set against quite possibly the cleanest vocal we have ever heard from Jessica Ball. An enormous departure from their past, the track signals the band’s willingness to embrace completely new avenues of sound, veering into almost synthwave territories without sacrificing any of the inherent MWWB-ness of the band’s output.

With more experimental tendencies than ever, you might start to worry that MWWB are moving away from the granite-slabs of fuzzy riff power they exhibited on earlier releases – you needn’t. If the first half of this record is the band’s adventure into outer-space, the second half brings things crashing back down to the local mire. ‘Katyusha’ is just shy of 13-and-a-half minutes, an instrumental which exhibits the classic side of the band on full display as its riffs gnash and snarl, meandering along with the fury and whimsy of a passing tornado. ‘Five Days in The Abyss’ brings both the classic and new-world of Mammoth Weed Wizard Bastard together, combining the powerful doom metal energy of the band’s first albums with a building sense of musical experimentalism. Mournful strings set the tone early on, wailing up until the two-minute mark when the band burst in with some of the most imperious doom metal riffs this side of Sabbath, combining both effects in the finale to show complete harmony with how the band’s song-writing style has evolved to this point.

A band unlike any other, Mammoth Weed Wizard Bastard aren’t running the risk of becoming stale any time soon. And yet, even within the expansive boundaries of their sound thus far, the band have still found ways to continue expanding and evolving, shifting the goal-posts of doom metal even further out than the genre has already expanded this decade. Heading a genre reinvention which is championed by everybody from Chelsea Wolfe to Sumac and Conan, MWWB are putting a new spin on the established norms of the genre whilst bolstering their own abilities. ‘Yn Ol I Annwn’ is the fruit of a long process of refinement, finding ways to uphold the traditions of old whilst still beckoning in new avenues to explore in future. Quite what comes next for Mammoth Weed Wizard Bastard is a mystery – the suggestion this is the closing part of a trilogy certainly suggests that this phase of the band is done – but for now the foundations are in place for this band to grow bigger, weirder and more wonderful than ever.