Support for my latest adventure into gig land came from Buffalo Summer. This is one of the great local bands that I have consistently managed to miss when they’ve played my local, so I was glad to finally catch up with the boys from west Wales an unexpected bonus on the Kris Barras tour opening night.  Having been touring around some big festivals and bills with the likes of Sabbath and Buckcherry the guys stage craft was well honed even if the stage was a bit compact and bijou – so much so that you couldn’t see Gareth Hunt on drums, hidden behind the not too petite form of Darren King on bass. 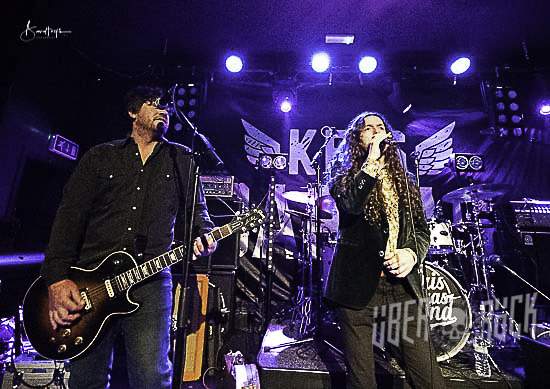 Being on camera duty makes concentrating on the first couple of tracks difficult to remember but everyone appeared to enjoy the opener, called ‘Walls’ on the setlist

‘Make You Mine’, from the second album, is a very light track with a very catchy riff that was dedicated to a long term “Summer” fan in the audience. An appreciative partisan crowd were very happy with the start which was followed by the more bluesy ‘Little Charles’ which demonstrated the guitar ability of Williams admirably.

‘Heartbreakin’ Floorshakin’’ was driven along by the rhythm section of Hunt and King with Williams tending to play mainly rhythmically than any serious lead work. This was followed by the treat of a new track called ‘Untouchables’, from the next album’ which was thoroughly lapped up by the crowd. ‘Rolls On Through’ demonstrated the skills of King on bass and Gareth on drums as well as the now growing on me guitar of Williams; at this point it was obvious that these lads had earned the right to be on this bill and many others. 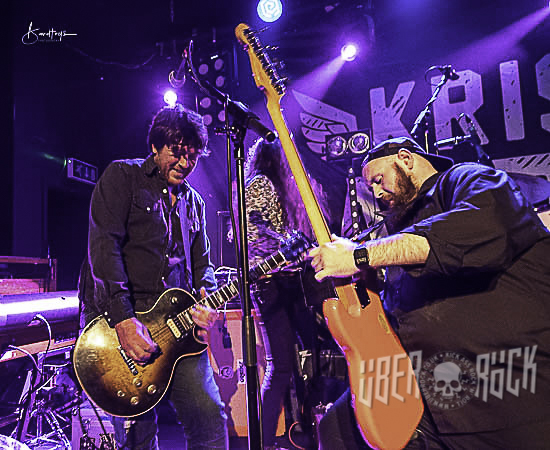 ‘Down To The River’, from the first album, was a bit more bluegrass blues than rock with a definite southern feel to it.  Nothing wrong with versatility in style.  Finishing off with ‘Money’, from their second album ‘Second Sun’, was a good way to go. A definite Zeppelin-esque opening riff by Johnny Williams quickly led into Andrew Hunt’s soaring vocals hidden somewhere beneath his dark brown curls that had a few of the women reaching for the hairbrush before heading for the merch stand to meet the boys

If you haven’t seen these you need to, I know I’ll try my best not to miss them again! 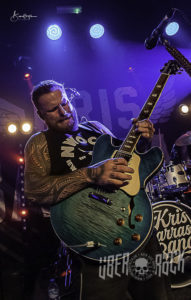 With a backstory that reads like a Hollywood script (childhood player, disillusionment, bankruptcy, cage fighting and sadly the death of his father aged 54) I went along wondering how good a guitarist could an ex-Mixed Martial Arts fighter be: I knew one thing – I wasn’t going to risk saying he wasn’t!  There was no need to worry; anyone who has played guitar from the age of six was likely to be pretty good.  Kicking off with ‘Rock n Roll Runni’ Thru My Veins’, and yours truly only a guitar length away from him, it was easy to see (and hear) why the meteoric rise up the blues-rock circuit has occurred. There was no effort in the guitar work and the judicious use of slide added to the bluesy sound of the track.  Even without the backing vocals off the album it’s a very good track. A quick switch to the more laid back sound of ‘Kick Me Down’, admirably supported on Hammond organ by Josiah J Manning and the rhythm section of Elliott Blackler and the effortless drumming of Will Beavis, I realised I was in one of those  “I was there” moments.

‘I Don’t Owe Nobody Nothing’ was written after the recovery from bankruptcy and has a Deep South blues feel to it.  Having had a bit of a rest over the holiday period writing more tunes led to the new track, ‘What You See Is What You Get’, before  the introduction of the Led Zeppelin tribute ‘Rock n Roll’ – and a damn fine tribute it turned out to be with the crowd joining in with catchy little number.

Another return to slide guitar upbeat dominated southern style for ‘Heart On Your Sleeve’ from the first album ‘Lucky 13‘, really got the crowd bumping.

A couple of instrumental solos led into the “laziest” drum solo Ive ever seen: not really lazy just so laid back it was horizontal the sign of a musician at the top of his game in this genre of music.  Follow this with ‘Propane’ from the latest album ‘Down and Dirty‘, which has a very Steely Dan/’Ricky Don’t Lose That Number’ sound to it. ‘Vegas Son’ was written about his experience fighting in MMA and the “highlife” associated with the party city of the world.  The loss of his father from cancer aged 54 led to the track ‘Watching Over Me’ being written: a definite mellow blues track that shows his feelings and Gary Moore influence on his guitar work written from the heart.  Possibly my favourite track of the night, but then I love Gary Moore. 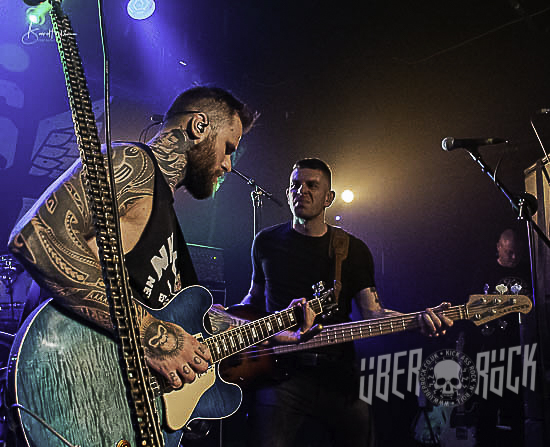 Enough emotion rattled into ‘Wrong Place Wrong Time’, a track that wouldn’t be out of place on any Jools Holland Hootenanny: I can see JH playing the piano and enjoying himself!  ‘Hail Mary’ was another crowd pleaser to end the night… except for the encore of ‘Lovers Or Losers’ that wouldn’t be out of place as a theme tune for ‘Sons of Anarchy’, with its southern feel to it.

Hell, that was a great night.  If you haven’t seen Kris Barras and he’s in your area on his extensive 2019 tour (which continues until 15 March, remaining dates below) I have four letters for you to ponder the meaning of… JFDI. You won’t regret it!