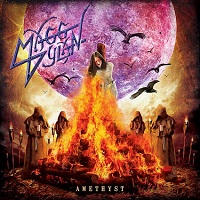 From the very first impression looking at the cover art of this album you know you are in for something that will be relentless. Although, my second impression from the cover was that the album was probably power metal. It was not. Instead, what I got was a wonderful heavy rock or alternative metal album. There are a lot of different influences in this album, hints of a few different styles, that come together well making a final product that will easily fit into many people’s collections. It bridges a few lines that make this fit nicely into a lot of playlists.

The vocal style here has hints of bands like Icon For Hire or even Breaking Benjamin among a few others that are escaping me at the moment. Lead by an aggressive and powerful female vocal that is occasionally contrasted by an angry scream or shout from a supporting male vocalist, you can really hear the emotion that was poured into each song shine through. Also, I am not sure if it is an accent or an intentional stylization but some of the lyrics are pronounced in interesting ways that I love. It makes the track stick out in your mind and therefore makes the whole experience more memorable.

Musically this album is unforgiving. The guitar and the drums are aggressive and heavy. Really driving the track. There is never really a time where things calm down. Instead, the whole album stays aggressive and high energy. The tone of the music is also perfectly constructed to complement the vocal style. Nothing ever felt disjointed or unintentional, instead, it seemed like every member of the band was perfectly in sync and therefore every track came together wonderfully to make a very enjoyable album.

This album is an easy recommendation. Especially for people who like that heavy rock style of bands like Breaking Benjamin or similar. The album is epic and would be right as part of a soundtrack to a movie. It comes off so much bigger than I expected. This will be a great addition to anyone’s collection or as a bridge for a person to find their way from a lighter rock genre into the heavier metal genres. For many, this might be a great way to discover new music they would have previously overlooked. You owe it to yourself to at least give this one a try. You will not regret it.