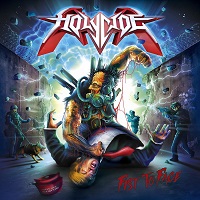 ‘Fist To Face’ by Holycide is something of a missed opportunity. The sophomore album by these Spanish lads is politically minded thrash and the cover alone is enough to promise a rousing call to arms for any metalhead who’s been feeling particularly angry about the state of the world since 2016, but instead it’s a bit… dull. The picture of the President being beaten in the face by a deranged mutant cyborg man is the most striking thing about it, the music itself is sadly rather forgettable. It might boast the most violently anti-Trump artwork since that Municipal Waste shirt went on sale, but alas that’s the most interesting thing about it.

Granted, we know full well that thrash isn’t exactly overflowing with envelope-pushing bands and certainly weren’t expecting a groundbreaking new dawn here. However, even by the standards of their chosen genre, Holycide are one-dimensional. After a brief introduction consisting of soundbites from Twitter’s favourite customer, they launch into the title track. It’s a fast, aggressive metal song with no time for subtlety or nuance, it’s pure sonic violence. And so is ‘Empty Cyber Life’, and ‘Vultures’, and ‘Nuclear Fall Out’, and, indeed, every single song on here. Holycide settle on a generic thrash template and stubbornly refuse to budge for the entire album. Everything plays at maximum intensity, all-guns blazing constantly and they rapidly blur into one.

That’s probably left you wondering if we’re thrash-haters here, but nothing could be further from the truth. The likes of Evile, Testament or even fellow Spaniards Angelus Apatrida all manage to get distinctive hooks and riffs into their music, varying up the pace between songs and keeping things varied, even within the boundaries they set for themselves. Holycide don’t, they just whack everything up to eleven at the first opportunity and keep it there. We’ll admit that ‘Trapped By The Crappy Trap’ raises a smile and they’re probably an absolute blast live, but on record these cuts just blur into a single homogenous mass.

Which is a real shame because political thrash can be utterly invigorating and lord alone knows, the current landscape is ripe for the taking. The anti-Trump movement needs better songs than Holycide can offer though and any hope of biting social commentary is lost in their uncompromising dedication to going as fast as possible. This’ll probably infuriate a few Russian bots online but it’s hard to imagine they’re going to make much of an impact beyond that.