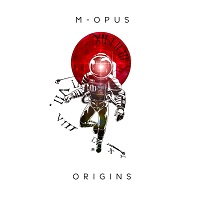 Now and again an album comes along that is truly epic in every sense of the word, in terms of its ambition, its feel, its scope and, most importantly, its delivery. Having been five years in the making, this second album from Irish proggies M-Opus most definitely fits all of the aforementioned criteria, delivering as it does a total of 28 tracks spread across a total of 135 minutes (that’s two-and-a-quarter hours in plain English, kiddlywinks). And its creators certainly have their prog rock pedigree very firmly printed on their shirts: band leader Jonathan Casey was a member of ex-King Crimson violinist David Cross’ band and is a well-known film and TV composer (does anyone remember ‘Zig & Zag’ or ‘Space Chickens In Space’?), while former Clannad/Genesis/Mike And The Mechanics guitarist Anto Drennan is counted among the guest contributors.

As might be more than expected, ‘Origins’ is a sci-fi based concept album. As we are informed in the intro, its story is set in 2187 and is based around a “washed-up, drunk, genius scientist called Miller McKee, who at the very outset of the story gets a ‘phone call telling him that his ex-wife, who was attempting (covertly, of course) to invent teleportation has been murdered (well, I sort of gave that bit away didn’t I?). The album subsequently follows McKee’s trail of investigation through space and time…

But, let’s put the storyline aside and explore the music, shall we? Well, in that regard, ‘Origins’ certainly lives up to its epic ambitions, coming across like something like a warped hybrid between Gabriel-era Genesis at their most hyperbolic mixed with the story-telling aspects of ‘2112’ meets ‘Operation: Mindcrime’ (in which latter regard ‘Armed Gods’ could have been ripped straight from the outtakes) and a cinematic soundtrack worthy of the original version of ‘Blade Runner’ (or ‘Star Wars’ on the likes of ‘March Of Fate’), all mixed with a dystopic Lynchian fusion of jazz, orchestration, prog and psychedelia-infused classic rock.

Casey says that he wanted to create a piece of musical cinema: and, in many ways, he has succeeded, as it is like listening to the audio feed of a movie without seeing the actual moving images, given its juxtaposition of soundtrack-style instrumentation and spoken word passages, the latter of which combine with the narrative of the song lyrics, which themselves both develop and drive the story forward with a very obviously carefully crafted sense of seamlessness.

Inevitably, it does have its flaws; one becomes obvious quite early in the form of ‘Find My Way Home’, which sounds so like U2 that its positively off-putting. And some of the lyrics are a bit twee: but, then, so are most of Jerry Bruckheimer’s scripts, so we can’t really fault them for that, can we? But, in other places it is elegant and emotional: the aforementioned ‘Find My Way Home’ is followed by the lilting, piercing ‘Known On The Coastline’, which is just sublime in its execution, reminding me of my all-time favourite prog band, It Bites, in its wrenching. Indeed, second generation English prog acts such as It Bites, IQ and Pendragon are neat reference points.

‘Origins’ is most definitely epic in every aspect. Indeed, it is on a scale that would make Ridley Scott extremely grateful that he took up directing movies instead of making music. It is a challenging, even a difficult, listen – perhaps the most so since Trent Reznor’s positively humungous ‘The Girl With The Dragon Tattoo’ soundtrack. Casey and his M-Opus bandmates – drummer Mark Grist and guitarist Colin Sullivan – describe ‘Origins’ as their “1978 album”: certainly, it echoes, emulates and reflects the heyday of the prog era, and in a way, ironically, which demonstrates why the genre disappeared up its own pretentious backside because, yes, it is overblown and riddled with bombastic musical hyperbolae. It does ease back into classic rock territory on the likes of ‘Never Giving Up On Your Love’, which wouldn’t sound out of place on a ‘Guardians Of The Galaxy’ playlist, pummels into heavy QOTSA-esque stonerism and even digresses into Lloyd Weber/Steinman style musical/rock opera miens (‘Don’t You Want To Feel My Heart’), but overall ‘Origins’ will most definitely work for fans of old-school style prog that ticks all the aforementioned generic related boxes more emphatically than many of today’s pale imitations or metallicized updatings.