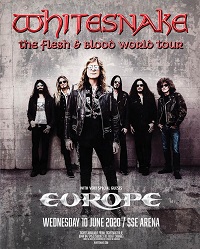 Whitesnake have added a show at Belfast’s SSE Arena at the end of their previously announced tour dates.

They will return to ÜR’s home city on Wednesday 10 June, with Europe as special guests. Tickets go on sale this coming Friday (24 January).

As previously announced, Whitesnake will join Foreigner and Europe on the following mainland dates: