Lost Legacy – ‘In the Name of Freedom’ (Pure Steel Records) 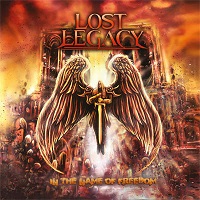 I probably say this all the time – in fact, there’s no probably about it at all – but I have a real soft spot for power metal. Now I know this is one of those genres that seems to be pretty polarising; some people think it’s too cheesy whereas others adore it for that very same reason. It’s a fine line to walk, with people’s tastes on the matter varying wildly from person to person, making power metal a difficult game to be in. You can stay distinctly middle-of-the-road to try and please as many people as possible, but often the act of doing so makes it difficult to stand out… what a dilemma!

Lost Legacy are no strangers to this game though, the New York natives have been bringing the power for over two decades now, yet this is only the band’s second album which follows up their 2009 self-released album ‘The Aftermath’. Clearly the band have been filling up their time with frequent gigging, the most recent of which was a tour supporting Metal Church on their US tour, which conveniently leads me into what Lost Legacy sound like. Yep, you guessed it, their sound is deeply rooted in the traditional heavy/power metal camp which results in something that does sound a fair bit like Metal Church! Although, one immediately noticeable difference is the significant difference in vocals. David Franco has quite the high vocal range which sounds almost classically trained although lacks some of the raw power that I like to hear in the more traditional heavy metal genre. Other than that, the musical sound is pretty much what you would expect. There’s twin harmonising guitar solos, heavy melodic riffage and hard, fast rhythm.

The album opens with a gentle piano melody in the form of ‘Rise to Glory’ which sets down this almost emotional introduction to lull you in before the onslaught begins. Leading the charge is the second track ‘My Faith’ which wastes no time in getting up to a pretty ferocious pace. This starts with some pretty decent dual-guitar harmonies but otherwise is mostly a middle of the road metal song. I think the more I listen to this song, the more I realize that Franco’s voice just isn’t tickling my testicles (so to speak). There’s bound to be plenty of people out there who dig his voice, as music is entirely subjective after all, but I’m afraid it’s not quite for me!

The heavy riffs in ‘Enough is Enough’ is one of the stronger points of the album and musically is a pretty great track. It’s got a distinctly Judas Priest vibe to it that certainly appeals to my tastes and the drumming from AJ Spinelli is pretty hard hitting with lashings of double-bass going on. There’s a smattering of backing vocals on this track which adds some of the power and depth that I’ve been missing so far. If there could be more of this, I would definitely be more inclined to give this some more listens!

But unfortunately, for me, this is unlikely to be an album that I’ll be playing over and over in my isolation over the coming weeks. It’s not a bad album at all, but it just didn’t quite push all of my buttons. There’s bound to be a good number of you reading this who are thinking “you’re full of shit Jonny, this is great!” and that’s fair enough, I hope plenty of you like it! If you are a fan of that traditional heavy/power metal sound then you should at least give this a go, it may do it for you!