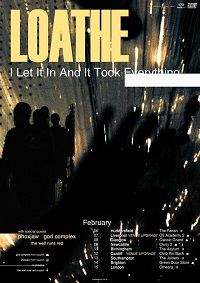 A local show for not just local people, Liverpool up and comers Loathe were moved to the O2 Academy from their original venue due to demand – a good show of intent for the band! With listed support from three bands, it should be a long evening of good music. On arriving at the venue, there is an issue with the fire doors, leaving a couple of hundred people stood waiting. An hour late, we finally get in, with our first support for the evening coming on very shortly after, though one of the bands don’t make an appearance, no doubt due to the delay.

Phoxjaw it is then that open the show to an audience that grows rapidly as the set progresses, as people are finally able to get in and the opening song seems to match grunge with equal parts sludge, something I am completely down for. There’s a good level of appreciation throughout and the newcomers seem to take as well to their grooves as those of us who have been around since the start, showing that Phoxjaw have been strong throughout, as well as tighter than a nun’s proverbials, a good sign of professionalism and not being distracted by the long delay to proceedings. An enjoyable and well played set.

God Complex are immediately a lot more aggressive, reminding me more of bands like the more Hardcore end of Malevolence in their own way, though the guitars are almost Prog metal in their tone at times. There are clearly a number of fans of the band in the audience as they scream along with the band. Heavy on the beatdown, that constant snarling presence on the stage bears well for those around me who clearly can’t get enough. The mosh pit has plenty of hostility, quite the opposite end from the previous night’s industrial crowd, while the band just hurl out what is nothing short of abrasive noise…and you can’t help but love it. They clearly will not do it for a lot of people but then that’s not what they’re aiming for and they are damn good at what they are doing. A great choice for main support.

After an extraordinarily long wait – close to 50 minutes when things are already late due to the earlier venue issue, though the venue have agreed to extend the curfew due to this – but the crowd still wait and cannot get into it in the main. The sheer energy as Loathe work through their brand new sophomore release ‘I Let It In And It Took Everything’ clearly strikes a chord with us all, as pits, crowd surfers and plenty of synchronised headbanging creates a sea of tangled hair and writhing bodies all around the venue. There is almost a jarring juxtaposition between their melodic and harsher side, with the quieter vocals seeming to struggle on a couple of occasions and the overall effect being not too dissimilar to some of the further removed Deftones tracks, quite to their compliment.

Being an album release event, even as part of the tour, the setlist is heavily comprised of this, with ‘Aggressive Motion’, ‘New Faces In The Dark’ and the title track all working particularly well, alongside the likes of older tracks like ‘Servant And Master’. The heavier end consistently seems to hype up the crowd, keeping the energy high, which the crowd continue to return in spades – there’s clearly a lot of love travelling in both directions, despite the musical hatred creating that wall of noise enveloping the venue. It’s a generally well-played set, the slight softer vocals mix aside and one that we all clearly thoroughly enjoy.