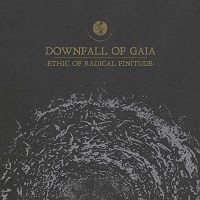 German extreme metal progressives Downfall of Gaia are now celebrating their 11th year as a band, having transformed themselves from a crust-inspired early sound into something more adjacent to post-metal and atmospheric black metal as the years have worn on. The fruits of their labour can be heard on ‘Ethic of Radical Finitude’, the band’s fifth record and a headlong plunge into a sea of post-BM atmospherics that take the frosty fury of black metal and affix it to the stunning textual diversity of post metal.

I started by asking how things had been going for the band since the release of ‘Ethic…’:

So far so good, I would say! We’ve had a lot of good feedback and this tour has been great so far, so we can’t complain.

Did you get much chance before the album was released to play any of the material live?

No, this is our first time out actually playing the songs from this record. The first two shows were actually a bit of a pain in the ass, learning to play it! A little tricky, but it’s great to play new stuff.

How have you found the fan response so far?

This is some of the best feedback we’ve ever gotten on a record; people telling us its among the best we’ve made. It’s what people liked about our earlier records, combined with the kinds of things we tried on ‘Atrophy’. Here we are, and people seem to like it!

Do you think the modern metal climate is more predisposed now to bands like yourselves, who mix different parts of different genres together?

Definitely – metal has changed over the last few years. Of course, there are still the conservative guys who think its not cool to try new things – and that’s cool, I kind of get it – but the music itself and the people listening to it now have changed so much, they’re more open minded nowadays to music, and not just single genres.

And what made you decide to include a number of guests on the latest record?

It was pretty intuitive; the record was already written, and I was working on the vocals and… it just felt right. There’s this classic sound [to what we do], but we also wanted to add nuances to what we do, so it came to our minds why not get some guest vocals? Luckily, the people who came to mind are all the people featured on the record. Nikita [Kamprad, featured on ‘We Pursue The Serpent of Time’] is an old friend of ours, so it was pretty easy to get him haha! He was also very into it, so we were thankful to get him in. Mers [Sumida, guest on ‘Through a Starless Night’] is also a good friend and had recently moved to Berlin, so that made things very easy for us, and it made us very happy to get her in.

You’re now hitting your 11th year as a band, what do you see as the biggest changes in Downfall of Gaia since you started?

Probably the GPS! I remember driving to our first shows and having to print everything from the internet. But the most obvious change in the music industry has been how you sell records – streaming and everything.

How do you think you guys fare in the streaming world, considering your records are so atmospheric and built around cohesive ideas as opposed to bite-size singles?

All our early records were over an hour long, but the last couple have only been around 40 minutes. For people nowadays, its much tougher to just sit and pay attention to something as they would have before, because every new song is just one click away. It’s getting tougher and tougher to balance that and justify making very long records.

If you had to pick three records that have influenced how you operate as a band, which would you pick and why?

Oh man… Let’s start pretty early: There was this Spanish crust band called Ekkaia who were very much like From Ashes Rise and Tragedy, they were a huge influence on what we do. I couldn’t tell you the exact name of the record – it was in Spanish, after all! – but that heavy crust sound really influenced us starting out.

Then I’d go for ‘White Tomb’ by Altar of Plagues – an amazing, incredible record that blew our minds and did a lot to expand our sound and what kind of things we could do.

Finally, it’d have to be Neurosis; you won’t hear this very often, but for me it’s all about ‘The Eye of Every Storm’. It’s a completely different Neurosis album, but its something that I just love from start to end. They’re just a few bands that have done a lot for us in terms of development for our sound, though.

How do you feel Downfall of Gaia stacks up in terms of the modern black metal landscape, especially as it has started to embrace bands like Deafheaven and Zeal & Ardor that don’t necessarily create traditional black metal?

We feel… pretty good, haha! There will always be people that really don’t like bands like us, and don’t see us as being “true” black metal, but that’s not what this music is for us. We take things we like and combine it; if people like it, cool. If not, also cool for us. Sometimes the internet dictates too many trends, but on the other side of that it allows groups of people to come together over something they love, and I love that.