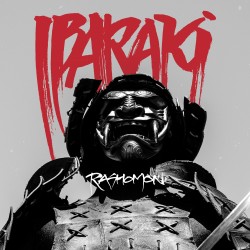 Trivium frontman Matt Heafy has long been known for his fascination with all things to do with the Samurai culture, and has played with the logos and mythos at multiple times throughout the band’s career, incorporating it into both their audio and visual imagery. So, it was perhaps only natural that, especially with the Covidications of the past two years putting most of us on hiatus, he would explore his Japanese ancestry even further, which is just what he has done with this declarative side project…

Like all side projects or solo explorations, Ibaraki bears some resemblance to what its creator is best known for, but it is also sufficiently different to make it clear that this is a differentiation and a broiling beast of its own making and destiny. Yes, the trademark Trivium-esque groove metal miens are there, and Heafy can do little to disguise his voice, but when the likes of ‘Kagatsuchi’ and ‘Jigoku Dayu’ explode into furious, frenetic life you realize you are tackling a totally different beast altogether – especially when the likes of Nergal and Ihsahn (both of whom have collaborated with Heafy in the past) become involved and stamp their own dark authority on proceedings.

‘Rashomon’ is a remarkable piece of work, which showcases its creator’s ability and willingness to push the creative envelope as far as possible, stepping outside what might be seen to be his alt-groove comfort zone to incorporate elements of grindcore and other extremities (Gerard Way must have absolutely ripped his pretty boy vocal nodes out on ‘Ronin’) as well as the beautifully contrasting elements of traditional Japanese instruments and memes.

I’m not a Trivium fan. I did not know what expect from this album and so approached it with a large degree of scepticism. My approach was unfounded, as this is a very worthy album. One which brutalizes as much as it beautifies. Which challenges as much as it rewards. An album which is worth investigating, but above all listening to…