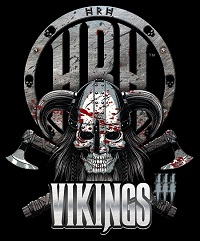 Nursing a slightly sore head after doing battle with many pints of ale the previous night, I made my way back to the O2 Academy for another day of Viking debauchery. The line-up for Sunday had a couple of last-minute inclusions that I was particularly excited about so I rode my wave of enthusiasm through the hangover to find myself ready and waiting at the main stage for Womenowar. This wasn’t the first time I’d seen this delightfully tongue-in-cheek tribute to Manowar though; in fact I previously won the prize for being the “most Manowar-looking fan” at their Bloodstock set in 2019: let’s just say it involved leather hotpants and baby oil, and leave it at that…

Joined with two special guests “The Man-O-whorE” and “The Spread Eagle”, Womenowar took the stage to inject some serious energy into the crowd! It took a little while for some of the crowd to warm up (probably due to the hangovers!) but even early on in the set a few people were raising their hammers enthusiastically as Erica Had’ems and the band blast through classics from the Manowar catalogue including ‘Manowar’ and ‘Brothers of Metal’ before requesting all “wimps and posers” to leave the area so that they could bring the house down with ‘Metal Warriors’. By this point, the crowd were completely enthused and the whole place was bouncing with the energy that I needed to kickstart the day. We’re even treated to a guest appearance from the guitarist from the other premium Manowar tribute band, HanOwar, to add a little testosterone into their rendition of ‘Battle Hymns’ to close out this set. I’m sure the lucky three people who got their hands on the only surviving genuine Womenowar “Battle Hymens” T-shirts will be cherishing them for years to come after that performance! 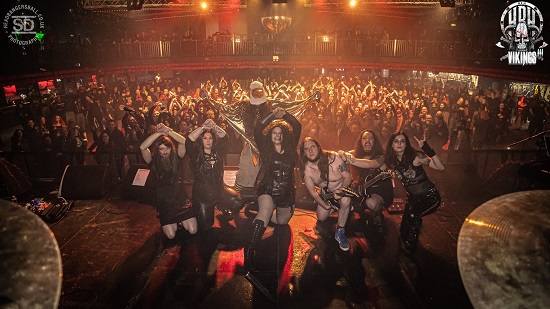 I made my way to the second stage to catch Akilla who brought some great melodic death metal to the party which, as many will know, totally floats my longboat! It was pretty sparse in this upstairs room in the Academy, to a point where I wonder how many people actually made their way up there over the course of the weekend! It’s a shame really, because Akilla deserved to pull in a larger crowd with the quality of their music, it had that mix of melodic guitar riffs and death growls that just hits the spot and is comparable to the likes of Omnium Gatherum.

Back on the main stage, we were treated to some genuine Sheffield steel in the form of Kull who provided a huge contrast to their predecessors! Symphonic black metal was the order of the day with a sound that reminded me of Cradle of Filth. Unfortunately, that’s not something that really tickles my testicles, but there were a good few devoted fans who received this lineup addition enthusiastically, with many clearly knowing the band in their former incarnation as Bal-Sagoth as well. So perhaps I need to have another go at listening to them to see if it sticks any better as there’s clearly something to get excited about.

Necronautical were the next band I caught on the main stage who were another act who fell in the same category as Winterfylleth from the day before. Treated to some more fast and heavy black metal, but with the added surprise of some powerful operatic vocals provided by Vickie Harley (and not just a recorded sample which is often the case!). Musically, the band were great, but there’s a bit of a question mark over whether it was really what the crowd were looking for in HRH Vikings but nevertheless there was still plenty of pit action so it can’t have gone down badly at all!

I then bounced up to the second stage to catch what turned out to be my surprise of the day with Wretched Soul. It was the busiest I’d seen the second stage all weekend as everyone got moving to the fast thrash-fueled riffs and a combination of death growls and Bruce Dickinson-esque wails! It was here I spotted a group of “more experienced” metallers (one looked like my Dad…) sporting helmets with blue and red flashing horns that spent the whole set bouncing off of each other which is what HRH Vikings is all about and a great way to wrap up the second stage for another year!

Back in the main stage it appeared a lot of the crowd were starting to suffer the effects of being out of party-practice over the last couple of years with people catching little naps all over the venue and it was down to Memoriam to bring them back to life. Again, another last minute addition to the line-up, the former Bolt Thrower frontman is no stranger to whipping crowds into a frenzy and he took up the challenge with gusto. By the end of an absolute battering of proper old school death metal, Memoriam seemed to successfully resurrect the crowd and get them bouncing once again just in time for the final headliner of the weekend…

I’m sure the guys at HRH found themselves asking the question “how do we find another folky alcohol-loving band to replace Korpiklaani who are UK based and available at short notice?” naturally the answer had to be Red Rum. Personally, I think it worked well to bookend the day with two bands that don’t take themselves seriously as it quite simply made the day a lot more fun! It appeared that the majority of the crowd agreed as the main stage was possibly the busiest, and most rowdy, that I had seen all weekend. Blasting through some old favourites like ‘Booze and Glory’ but also throwing a few new tracks as well to tease the release of a new album next year, the band encouraged the crowd to jig the night away to their piratical tunes.

There were even some well received covers in the setlist too, including the Irish folk song ‘Seven Drunken Nights’ and, of course, no Red Rum set would be complete without their cover of ‘They’re Taking the Hobbits to Isengard’. But I think the standout moment for me had to be the enormous rowing pit to Red Rum’s pirating of ‘Rollin’’, aptly titled ‘Rowing’. Yes, that’s right, it was a pirate-themed rendition of Limp Bizkit’s rock club classic and I was in absolute stitches listening to it!

After another day of partying like a Viking I was quite ready to hit the hay before returning to reality on Monday. But I can safely say that Sunday had been a far more fun day thanks to the inclusion of Red Rum and Womenowar, who might just be my standout band of the weekend. While they are a bit of a piss-take cover band you cannot ignore the musical ability of Womenowar (which can be seen more in their “serious side-project” Dakesis) and the combination of comedy and great covers kept the crowd hooked for the entire set! Considering the significant challenges faced by the HRH crew, they managed to pull together a great weekend at the last minute and I hope that next year Odin smiles upon them to bounce back with a bigger and better (and international) HRH Vikings IV because I fully intend to be back again!