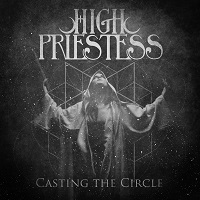 Having covered their self-titled debut release back in 2018, it would have been rather remiss of me not to keep up with a band I really enjoyed the first time around. Of course, it’s that difficult sophomore release, though, which contains that worry of whether they stick to earlier form or whether they twist to something slightly different. Well, there’s only one way of finding that out.

Even on the first listen, this is an absolutely stunning composition throughout. Their alluring vocal harmonies have been harnessed to even further intent, with this whole album feeling somewhat like the religious experience their name would suggest, melody heavy in a manner that is simply captivating to the ears. It feels somewhat like Black Sabbath covering Hawkwind – thinking of ‘Hassan I Sabha’ and similar – with Grace Slick and the Heart’s Wilson sisters leading the vocals – which is some heady concoction indeed.

In terms of tracks, it’s hard to pick out standout tracks, such is the strength in depth of each track and with their only being five in total, it actually would not be fair to single any, in particular, out for special praise. The closest I can get to doing so is to mention that the in excess of 17 minutes penultimate track ‘Invocation’ feels nothing like that long, with the varying instrumentals blending well, whilst the distorted vocals that weave in and out of the song like an intricate tapestry leave you in no uncertain mind of anything but a feeling of being in the presence of something so different from a lot of the current field of play. There is a heavy fuzzy psych feel to so much, with a turn to full doom with psych vocals around halfway through ‘Invocation’ acting almost as an interlude amongst the tribalistic drumming parts, yet that does not even begin to describe quite how astounding this track is, nevermind the rest of the release.

This comes across like a genuinely enthralling piece of work and one that deserves to be brought to the notice of anyone and everyone. Not only have High Priestess stepped up their game from an excellent debut release, but they have also created something that I doubt will age poorly with time. A highly intoxicating album with sonic landscapes that won’t so much drag you in as it will have you moving, spellbound, towards them without you even noticing. Whether you like hard rock, psych, doom or melodic rock, there is so much that this should appeal to that I don’t so much recommend this as beseech you to do possibly the best thing you could for your ears this year and at least give it a listen.

‘Casting The Circle’ is released tomorrow (Friday 10 April). You can get your copy HERE.