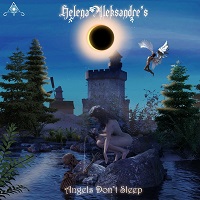 Whatever expectations you have in your head for this, it is probably not what you think. ‘Angels Don’t Sleep’ has most of the elements that I love and really look for in an album. There are some folk elements. There is some experimentation with other sounds and effects. They even have contrasting tones between electric and acoustic guitars. I mean it is almost like this album was written in many ways to cater directly to my tastes but with all that being said I found myself a little bored at times. That is not to say that I disliked the album by any means… just that there is something missing.

Vocally, things are pretty good. While things do tend to get a little repetitive there is a relatively unique vocal tone that has decent potential. There were a couple of times where I don’t quite think she hits the mark as well as she could have but not enough to hurt the experience. Other than those few moments though the rest of the experience does feel pretty deliberate, vocally at least. I do think that there could have been a little more evolution though. Things did feel pretty identical throughout.

Musically, things feel lest deliberate. Each individual measure is really good, but they seem to be put up again other measures that there is not really a smooth transition to. This leads to harsh transitions that at times feel jarring. Not every track is this was though and when they hit the mark they hit it well but unfortunately, that is the minority of the time. Because of these harder transitions, it is hard to really get into the flow, so I found myself lost and a little bored at times.

There is a lot of potential here. Especially along the folk lines. I think Helena Aleksandre could really be great but just needs a little more polish and refinement. As it stands now though there is not all that much to really draw you in just a collection of really good elements of music that are not quite put together the way I would like. There is no real evolution to guide the experience. That all being said, the more I listened the more it started to grow on me. There is an odd charm to some of the strange transitions and as background music while working, it is pretty chill. To sum up I’m not going to wholeheartedly recommend this one but I do think it is worth it to give a listen and a fair chance who knows you might like it better than me. I think Helena Aleksandre will make waves in the future and that potential is shown here.