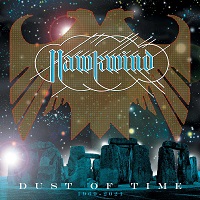 “Finally, an anthology that covers the entirety of the Hawkwind back catalogue” I hear you cry – yes, I share those same sentiments. While mighty Hawkman Dave Brock has been our resident space guru throughout the entirety of their career but there have definitely been different eras within the group – Robert Calvert and Lemmy being among the alumni of the legendary band, as an example. The days of their dancers seem to be gone but in a live setting, their combination of hypnotic rhythm and psychedelic visuals is still unrivalled, keeping them as relevant as ever. So, what does this compilation have to offer?

The anthology contains a mix of original tracks, ones added into later remastered versions of albums and some mono singles, live versions and a couple of edits and shows a full variety of their sound and range from across their career. 6 CDs of their best and deepest cuts, an impressive 81 tracks that tested my knowledge even in some cases of quite which release some of the tracks were on, which shows that the curator had an excellent knowledge of the full discography to blend in their chosen songs as they did and make each CD feel like an album in itself.

Favourites such as ‘Spirit Of The Age’, ‘Silver Machine’ and ‘Shot Down In The Night’ were always likely to be included in such a bumper compendium (though my personal favourite track, ‘Damnation Alley’ is nowhere to be found), while newer songs such as ‘All Aboard The Skylark’ are included alongside the likes of ‘Bring It On Home’, a pre-Hawkwind demo recorded by Dave Brock in 1968, emphasising quite how deeply the compiler’s knowledge of all things both Hawkwind and their spinoffs have created through their career.

It’s pleasing to note that the live tracks sound like they have been recorded straight from the board too and don’t have any crowd noise in them that is clearly noticeable, something which is off-putting for some. The sound is good throughout all of the selection, well mastered and displaying the musical ability of the revolving door of members they have had play alongside Brock through their 52 years as an act. The one thing Brock has always insisted on is the person’s ability to play live – as shown by his dismissal of Nik Turner for ‘sloppy live playing’ in the 70s, and that is truly born out in each track of this selection.

Most importantly, this anthology serves as a testament to quite why Hawkwind have lasted as long as they have, through their space rock sound, their science fiction inspiration, even outside of the Michael Moorcock written parts and quite how vital they remain to different musical genres even to this day. Whether it’s acid house, space rock, progressive rock/metal or a multitude of other genres, the continuing influence of Hawkwind to this day is undeniable and this selection demonstrates quite why.

Ardent fans may have the majority of these tracks in some form, but outside of those few that have every single release – including reissues – in their collection already, there will likely be something new here to most existing fans of the band, let alone the more casual follower. An epic compilation for an epic band.