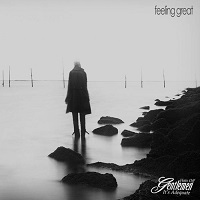 Rounding off what was quite a ridiculous year, I’d got a few stragglers to review before I could completely say sayonara to 2020. The first of these was a little EP that hit the streets at the end of the year, courtesy of Hats Off Gentlemen It’s Adequate, who have been using some of the enforced isolation time to channel those creative juices and shape them into a release.  Like the rest of Hats Off Gentlemen’s back catalogue, this common thread throughout the album is particular theme, which allows the guys the freedom to be creative with a mix of different styles and influences.

For the avoidance of doubt, ‘Feeling Great’ is not related to the upcoming album ‘The Confidence Trick’ and instead serves as a little appetite suppressor to tide you over until that comes out; a bit of a musical appetiser if you will.  It’s an EP that draws heavily on the experiences of, well everyone, over this year which results in a predominantly sombre collection of songs.

Kicking off with the incredibly relatable ‘Feeling Great’ which, despite its title, is not a jovial number by any stretch of the imagination. I feel like just about anyone will be able to relate to the sentiments of this song as it displays a raw honesty that some of us probably wish we could express more often. I mean how many of us have thought to ourselves “I’m not feeling great, thank you for asking, but I don’t think you want to hear about me crumbling” but instead come out with the classic “I’m fine thanks”. I know I’m certainly guilty of that! It’s a gentle piano-driven ballad that accompanies the brutally honest lyrics that invokes a feeling of catharsis as you allow the song to express those buried feelings for you. And if this hasn’t managed to get you in a reflective mood, it’s immediately followed by the instrumental blues piece ‘Struggling’ that helps maintain the reflective state brought out by ‘Feeling Great’ and has a very clear Pink Floyd influence in the way it manages to both grab the attention yet also feel relaxing at the same time.

Things take a completely different direction for the funky bass-prominent track ‘Callisto Cuddle Sponge’ named after Phillip K Dick’s alien parasite. This name has clearly inspired the sci-fi vibes that positively ooze from this song that are amplified by liberal synthesizer usage. But finally, to close out the EP, there’s a remastering of an electronic instrumental written by Malcolm Galloway in 2011 and was only considered for release after a fan heard it on a YouTube video and called for its release. It pairs up pretty well with the last track and continues the sci-fi theme.

The result is an EP of two distinct halves, one that focuses on reflection and the melancholy that has dominated 2020 and the other that looks to the future (if only a fictional one) to spark the imagination in preparation for things to come. All in all, not a bad way to round out the year for Hats Off Gentlemen It’s Adequate and serves as a reminder to expect more from these guys with their upcoming full length album release.