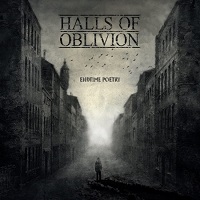 ‘Endtime Poetry’ is truly a masterpiece. I should warn you there will be a lot of gushing in this review. All I knew before going into this album was that it was melodic death metal with some black metal influence. That, however, is just the surface. This is so much more! There are only nine songs but each of them is unexpectedly long with incredible evolution never feeling even slightly dull or repetitive rather each song feels more like an epic novel that you want to read over and over.

The vocals are very powerful and very much their own sound. It is a very deep throaty growl but with a very slow grumble. I almost would describe the sound a fry rather than a growl. It has that broken popping or rumbling breakup you get when you are frying bacon over a low heat. It is a really enjoyable effect. The guest vocals from Timo Fielker on ‘Last Glance Of The Sun’ and ‘Walking Dead’ are stellar. In ‘Last Glance Of The Sun’ there is a reverb on Timo’s vocals that gives it a sound much like being in a large and empty stone cathedral the effect is so well done that if you close your eyes you can almost see the building and the stones his voice is echoing from. This effect is contrasted expertly by the fried growling vocals from Sebastian Ruf creating a complement similar to that of a nice dry red wine with a juicy steak. It is an experience that is hard to top.

Musically this album is delightful as well. There is a fantastic contrast from the dark and heavy all the way to soft acoustics or clean plucked electrics creating so much depth and variety in the composition. This is how they are able to have such long songs that never get old or boring. This is the kind of music you poor a glass of your expensive scotch and sit down, close your eyes and enjoy. When the album is over you poor another glass and listen again and again.

There is so much passion poured into this album from the band that it does not feel like I will ever be able to fully appreciate the experience. Each time I listen it get better and there are new feelings that I had not noticed before. So much care was put into crafting this experience. Not only is every song carefully crafted so that from start to finish the evolution is seamless, but it also seems that where every song is on the album is very thought out to make the whole experience flow as best as possible. So many albums have a point where about halfway through you are done with the best songs. The remaining ones are still good but not up to the first half. There is nothing like that here. Every song is as good as the others and will draw you in. Everything is so well-balanced. The particularly special moments such as the soft acoustic breakdowns or the sung vocals are spread over the whole album making the whole thing feel complete.

‘Endtime Poetry’ has the potential to be one of those great albums that in 30 years we will still be talking about. I know I will be. If you like melodic death metal or black metal, you absolutely should give this one a listen. If those genres are not normally your thing still give this a try. It might change your mind. ‘Endtime Poetry’ will be one of the albums front and centre in my collection from now on.