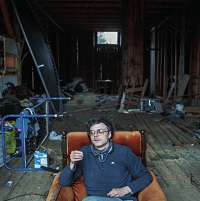 Described as a “rural legend”, the enigmatic H.C. Slim is, apparently, a cult figure of sorts in his homeland. He writes songs in between distilling his own alcohol, and subsequently demoes them on a tape recorder, all while squirreled away in a cottage deep in the eastern Finnish countryside. Over the years, cassettes and CDRs began to circulate with original copies selling for high prices, before Svart Records drove out to his remote self-cabin to offer Slim a deal for his debut album. Well, that’s the “official” story anyway… whatever the veracity of the mythos that has been built up around him, this is the result.

Slim draws on the rich songwriting tradition that stretches from the likes of Ramblin’ Jack Elliott and Woody Guthrie through Bob Dylan, Tom Waits, Neil Young and Leonard Cohen to the likes of Suzanne Vega, Laura Marling, Tom Petty and Nick Cave. His songs are simply eloquent, just him and an acoustic guitar (and occasionally a harmonica or a touch of slide), but deeply incisive, emotionally charged and filled with the sort of pathos which many songwriters of his ilk fail to achieve, especially so early in their career.

There is nothing happy or joyful about the songs. They are dark and morose, mournful and filled with stories of regret and longing. They are the songs of a wandering minstrel who has seen little to enthuse him other than the need to tell the stories of the broken people he has met and the broken places he has met. While songs such as ‘Boat By The Sea’, ‘Cherubim’, ‘Sweet Virgin Mary’, ‘I Obeyed A Heavenly Vision’ and ‘Over River Jordan’ infused with gospel-related themes, there is nothing evangelical or preachy: if anything, they are damning indictments of the role religion has played in crafting the dark underbelly of the world from which he takes his inspiration. Even the occasional moments of humour, such as the opening lines of ‘I Saw A Man’ – “I saw a man hanging by his neck/Swinging from an electric wire/We thought it quite a laugh/Should we take a photograph?” – possess a dark morbidity and a sense of the surreal, something which also permeates each of the 12 songs.

‘Sings’ is a beautiful collection of songs. Yes, they are dark, but they are delivered with a lightness of touch that allows their elegiac qualities to shine through, bringing a sense of redemption to both their creator and the listener. Often it is the darkest moments that provide the greatest redemption, and H.C. Slim has provided the soundtrack to that journey.