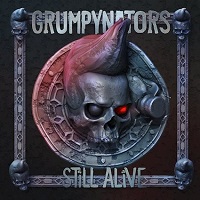 Hearing a band described as mix of Social Distortion, Motörhead and The Stray Cats piqued my interest straight away. The concept conjures up all kinds of things in the minds ear. Certainly, the idea of a sound with catchy rhythms, gritty riffs and bags of swagger. That is exactly what the Danish four-piece Grumpynators have offered up with their third album, ‘Still Alive’.  No strangers to the live circuits of northern Europe and bagging support slots with countrymates Volbeat, Grumpynators have been a hard-grafting band and their energy and passion shines through on this record.

What is immediately clear from the first run through, is that this band pack a high energy punch. The album rolls along with an enormous sense of fun encapsulated by the upbeat tempos, catchy, easy to sing along choruses and rockabilly buoyant rhythms. There is an edge though, the riffs bite, the guitar lead lines cut through with razor precision when required and there’s plenty of moments that will make the listener bang their head. It ticks a lot of boxes.

With the title track opening things up, the listener is immediately pulled into the infectious groove created by the rhythm section. The guitar punches through the mix with rough edge yet well balanced with the clean vocals. An obvious choice for one of the single releases from the album. It exemplifies the quality of the song-writing and power of the album.

The four-piece have certainly hit their stride with album three. Over the course of these ten tracks they’ve harnessed what was so exciting about previous album ‘City of Sin’ which in turn was an evolution of 2015’s ‘Wonderland’. As we move into the high tempo, rabble rousing ‘Going Away For Good’ Grumpynators are illustrating the type of songs that makes them such a hit on the live circuits. Easy to sing along to with appropriately placed whoa-ohs combined with the aforementioned rockabilly bounce.

As the record progresses there’s lots to pay attention to and highlights aplenty. The single release ‘Blood And Bones’ illustrates the heavier side of things with the guitar riffs really taking charge of the sound and the rhythm section providing a straight down the line heavy rock groove to exercise the neck muscles. The vocals are a little harsher too in order to match the instrument delivery, this gives the whole track a weightier punch than the previous numbers.  ‘Feel the Same’ and ‘Dream Girl’ keep the party vibe and high energy flowing while still retaining the hard rock core sensibilities. The former works similarly to ‘Going Away For Good’ in that it has the energy of a good crowd pleaser, while the latter also picks up on this, the up-tempo good time feel is supported by a heavier rock guitar line.

The mix of the whole record supports the sound that Grumpynators have worked to create. It allows for the perfect balance of the instruments while pushing the high-octane energy created by the rhythm section to the fore. Nothing gets lost or hidden, the subtle guitar cut through just as well as the not so subtle ones. The vocals have clarity allowing for the lyrical content to be accessible while harnessing the gritty energy of the heavier tracks.

There’s not a dull moment to be found on this album. True, after a number of run throughs, certain favourites will appear, but there is no indication of filler over the ten tracks present. What there is a sense of, is that this is the album the four-piece have been working towards for a while. There are elements that have been included from previous releases as well as definite improvements. This is a great indication of how they’ve grown. It’s impossible to not get swept up in what has been created here with tracks to suit a lot of varied tastes but with an unmistakable signature sound. The unique, energetic style of mixing rockabilly with heavy hooks the listener. It’s impossible to not sing along by the second chorus.  It’s just bloody good fun! 2020 needs fun records and Grumpynators have certainly delivered that with ‘Still Alive’.