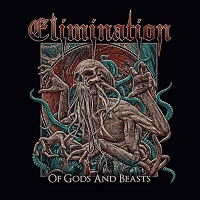 Old school thrash fans may well be familiar with the name of Elimination, as for a brief period the East Anglian trio threatened to be serious contenders on the UK scene and trouble more than its dark underbelly, releasing two excellent albums before falling quiet in 2012. Thankfully, two years ago they returned refreshed, re-invigorated and ready for the fight once more, further signalling their intent to take no prisoners with this just-released, all-too-brief sample.

With just three songs contained in a time frame of little more than 13 minutes, it is perhaps a good idea to keep things brief after such a long period away from the game, and on this assumption ‘Of Gods And Beasts’ definitely, and defiantly, delivers the goods as its three progenitors – bassist vocalist Neil Stevens and guitarists Leigh Rumsby (whom some readers might know from his sojourn in Stahlsarg) and David Hill – set about serving us up with the tastiest possible appetizer for what is to come from this renascent force.

As their name suggests, there are no airs or graces about what Elimination do: it’s just good old-fashioned classic thrash metal, very much in the vein of early Slayer, Testament, Kreator and their ilk. They concentrate on pushing your neck muscles to their full extent and getting your hair (or what’s left of it) flailing like a windmill in a hurricane. Sharp riffs cascade and tumble over you, backed by that all-important sense of melody and harmony, which the twin guitarists deliver with aplomb and clarity. The overall effect is fully enhanced by Stevens’ clean vocals, as he eschews the temptation to which many new generation thrash acts have succumbed by ruining the sound with needless death growls rather than enunciating the lyrics in a which gives an extra level of acidity to the final delivery.

On the final of three tracks, Stevens asks ‘What Have I Done?’. What you have done, my man, is produce a clear and precise statement of intent, one which works on every level. Prepare to be eliminated…