After a 45-minute trek on a minibus with a few new people onboard, we arrived at The Diamond to a quickly filling up venue and pleasantries being exchanged. Baleful Creed blast through our eardrums with ‘Momento Mori’ to bring the night to a raucous beginning. John’s first guitar riff brings the crowd forward and that’s were they stay as the band slide straight into ‘Forgiven’ and ‘Hex’ then ‘Devils Side’ back to back. 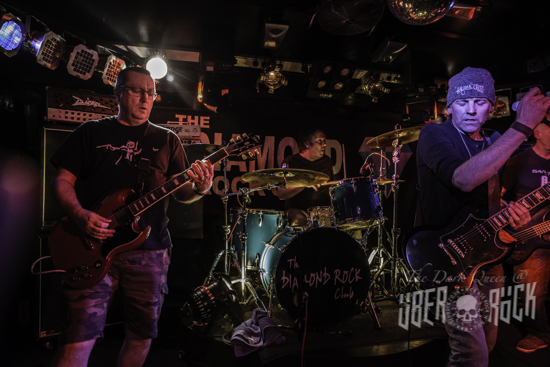 As the dual action between lead and rhythm guitars interjected with sporadic bass riffs and drum lead us into ‘God’s Fear’ Fin’s raspy vocals bring forth the story of conflict between us and the higher being, and the crowd start to sway in a hypnotic sort of trance.  Fin, being his usual “I don’t talk much” self, then interacts with the crowd as he tells everyone that he is passing the vocal responsibilities over to Dave for ‘Lose Religion’; this one really has the crowd jumping (well, as much as they can, lol).  As they skip one song on their set list (because Fin forgot his harmonica, lol).,  ‘The Wolf’ brings the doom back into their set but it still has the crowd singing along. OMG Fin talks to the crowd again (lol) as he introduces ‘Autumn Leaves’ and dedicates it to ME (well, the guys know I love this song). ‘Crazy Man’ brings their blinding set to an end leaving the crowd wanting more (but hey guys there’s always the next one). 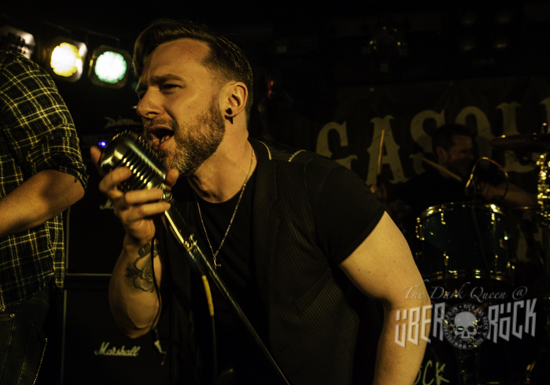 Gasoline Outlaws decide, because it was May the 4th they would introduce their their set with the theme from ‘Star Wars’: personally I thought this was a bit twee and so did some of the crowd – but hey it was their choice.  They then proceeded to blast everyone’s eardrums with ‘Light It Up’ which automatically had the crowd eating out of their hands. They followed with another blast from the new album, ‘Fight For One More Day’ and Matt’s scream of “It’s my time” has the crowd pushing closer to the stage. Matt banters with the crowd as he introduces ‘Psycho’, another track off the new album.

So far, they are playing through the new album and ‘Where We Started’ brings the tempo right down. The crowd are slowly swaying and the couples there are holding hands but really enjoying the intimacy of this venue as well as the song. ‘System Is A Lie’ brings the tempo and atmosphere back up, before the first cover of the evening, Queen’s ‘Hammer To Fall’ Queen: why? This band have two great albums, one of which they’re launching tonight, so my question is “why cover songs and why so early?” 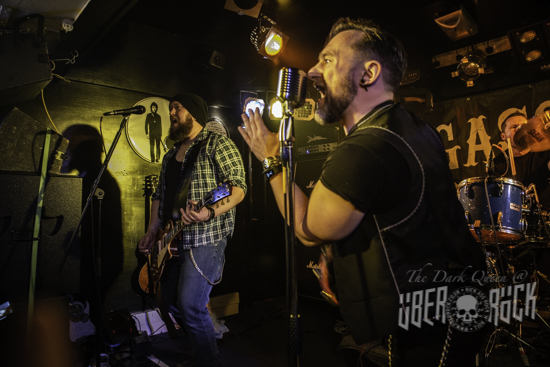 Matt tells everyone about the amazing Amy Montgomery and her part on the new album and we break for a raffle draw for a signed guitar before ‘Rising Up’ blasts everyone’s eardrums again, which slides straight into ‘Breathe Again’. The next song is the one I personally always dread (the guys know I love it) because this one always makes me cry, so as I hide in the smoking area ‘Someday’ brings the tempo down and also showcases the talent of this band. ‘Executed’ is a passionate and heartfelt performance of this song. ‘Outlaws’ brings the crowd straight back into party mode and the venue is jumping again.

The encore is a blast of covers, finishing with ‘Ballroom Blitz’ and has the crowds, many of them decked in Outlaws shirt, going nuts. Yes, they were good covers, but again I have to ask why do so many covers when you have so many great songs of your own….