Frank Iero And The Future Violents – ‘Heaven Is A Place, This Is A Place’ (UNFD) 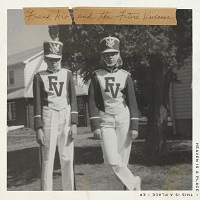 With a unique sound, ‘Heaven Is A Place, This Is A Place’ will definitely be an EP to check out, especially if you have enjoyed the previous work of Frank Iero’s, in his various alternations of the band. If you aren’t familiar with how Frank likes to run this project with every new release the band has an adjustment of name. This has varied between The Cellabration, The Patience, The Patients and now The Future Violents. Despite the projects name changing with the era, the sound remains relatively consistent between each body of work, which is undeniable with the unique vocals that Frank has.  If you’ve enjoyed the last projects there’s a high chance this EP will definitely be another that is well loved and will absolutely be taken to well when live performances with audiences can become a thing again.

As always in Iero’s content there is an incredible rawness and sense of  storytelling in his lyrical content and it shines through once again in this project, with stand out lines such as those in the EP opener ‘Violence’. This song is an incredibly warm feeling towards it, not only in how it sounds tonally but also in the richness of the lyrical content and the way the song has strong emotions which have been created within, such as feelings of aggression and dependence with some underlying sultry tones from harmonies.

“Your violence feels like kisses to me, your silence makes it harder to breathe/Your distance feels like I’m not enough, I need your touch.” These lines alone will end up stuck in your head in almost no time and they certainly portray the image of the dependence and aching which is a common occurrence within Frank’s content. Making an appearance in now two of Frank’s bands, Kayleigh Goldsworthy carried her musical ability from The Future Violents into The Future Violence and her addition to this project in particular has helped to emphasise many important feelings and dynamics within the songs. This is especially evident within ‘Violence’ where her vocals and use of keys have helped to build on the haunting and sultry dynamic which this piece in particular has.

‘Sewerwolf’ carries on the haunting vibes which has been developed in the prior song and really feels like it takes the cold  feeling of pain and turns it into a fiery power. It engulfs the listener in its story and has an incredibly thunderous feeling, especially within the screams which Iero does over the smooth bass line that carries the song along with the intriguing drum beat. ‘Sewer Wolf’ is pure seething power and carries a sense of redemption for any that need avenged. The feeling that this song holds is completely unavoidable and only further influenced by the lyrics scattered all throughout the song.

“When I took my first breath the earth rattled and shook/ I am graced by disgrace, I put rats in their place.” Not only does this segment of the verse showcase the power but Frank’s literal breath, instead of singing the word itself, adds an interesting dynamic and impact to the line which draws the listener in further. This song is definitely one that will hold a room in a live setting and have more than a few people off their feet.

To such a contrast enters a beautiful version of  R.E.M.’s  song ‘Losing My Religion’ which certainly takes you by surprise considering what had just been heard before. Despite how different this is to the other songs so far on the EP, it is incredibly complimentary to Frank’s vocals with the soft tones of the mandolin and is a very well done version of the song. It is incredibly enhanced with the harmonies from Kayleigh and what sounds to be the slightest hint of violin in the back of the mix as well. It’s also beautiful to hear the lower and more husky harmonies of Evan Nestor –guitarist for the band and the longest standing member in the band besides Frank. The way they have chosen to strip back the song in this cover certainly allows for Frank’s softer side to come through vocally and the way the dynamic builds in the piece by having the drums join in slightly later keeps the piece interesting yet still really calming.

Following on from there is ‘Record Ender’ which is a beautifully ambient ending to the EP, that  certainly has “late night drive to escape reality for a moment” vibes. The long intro for the song leaves you in anticipation to hear Frank’s vocals come in. Already in the first minute of the piece it has had such good dynamic with the wall of instruments hitting you so strongly once they enter and  as always the lyrics are completely raw and deeply emotional. In contrast to ‘Violence’ and ‘Sewer Wolf’ there is the complete lack of aggression within the lyrics and this song carries more of a sense of sadness and longing to make someone else feel supported and comfortable.

Frank’s sense of imagery in the lyrics of this piece really creates a beautiful and personal insight into a picture for the listener with lines that include “If it makes you happy I’ll wrestle the sun, the moon and the stars to the ground ‘til you’re proud” and “My sky’s been falling but you never knew, I promise I will try to smile if it’s the last thing I ever do”. It’s an incredibly beautiful song and certainly one that will get you deep into your feelings. ‘Record Ender’ feels like it could have been on the last project Barriers and also carries on the memory of songs like ‘The Resurrectionist’ from the Patience’s album Parachutes and ‘Guilttripping’ from the Cellabrations album Stomachaches – so definitely be sure to check those songs out from those projects if you haven’t heard them before and you like ‘Record Ender’.

Overall ‘Heaven Is A Place, This Is A Place’ is a breath of life and certainly a fitting addition to the collection of Frank Iero’s other band projects. The EP is full of  energy and should definitely be checked out if you’re down for listening to something new and interesting.