Footprints In The Custard – ‘A New Low’ (Self-Released) 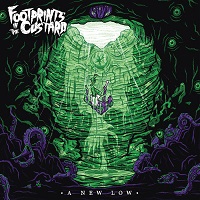 Heaven knows the bar has plunged to new depths now. ‘A New Low,’ the latest release by Footprints In The Custard is an absolute masterclass in juvenile behaviour. Coming across like a crass sex-comedy made into an album, it’s so shamelessly bad taste that giving them a negative review almost feels like playing into their hands. You can tell they’d be absolutely delighted to have offended every music critic that crosses their paths and were most likely rubbing their hands with anticipation when the promos went out, eagerly awaiting the chance to plaster every soundbite slagging them off across their Facebook homepage.

So sorry lads, but while ‘A New Low’ is tactless, idiotic and closes with a song so disgusting we’ve only been able to listen to it once, it’s also not a bad album. It’s not going to trouble the ‘Best Of 2019’ lists by any means, but some of the tracks are really fun. As a comedy record, it passes the six laughs test and while not every joke lands, it can be very funny. Plus, if you took all the humour out and rewrote it with serious lyrics, it’d still stand up quite well.

‘Beer Goggles’ for instance is a blast. It’s a catchy and upbeat number, with some razor-edged guitar work and gravel throated vocals telling a tale of staggering home in a drunken haze and getting baptised with a kebab. Anyone that’s ever spent a night on the lash will recognise that they’re speaking from experience and it’s guaranteed to be the only metal song this year to contain a cheesy chips reference. ‘Ride My Little Pony, Ride’ meanwhile is essentially Father Ted’s ‘My Lovely Horse’ turned into a metal song and even at its heaviest, it’s hard not to grin like you’ve just lost your virginity moments before.

‘Don’t Be A Cunt’ is a big call and response track designed for audience interaction, while ‘Bums’ is alarmingly entertaining for something so childish. Best of the bunch though are ‘Space Force’ and ‘The Horn.’ The former is a merciless piss-take of Donald Trump’s plan for an interplanetary branch of the US military, while the latter is piratical folk metal with a real earworm of a chorus. It could even be a hit single if they ever manage to find a radio station willing to play it on air.

Not everything works of course. ‘My Granny’s A Gusher’ and ‘Clit Commander’ are either brilliant or infuriating depending on your point of view. If you think Steel Panther are unparalleled geniuses then dive right in, but if you’re of the mind that they’re the Bo Selecta of metal then these will be easily skippable. ‘The Bar At The End Of The World’ on the other hand takes a different approach by being a heartfelt paean to fallen friends. It’s actually a very moving and impressive song, but it’s at odds with the rest of the album and you spend the entire thing waiting for a sarcastic line that never arrives.

In fact, much like the night of drunken revelry the first song revolves around, ‘A New Low’ is loads of fun while it lasts but feels like a terrible mistake once it’s over. Footprints In The Custard are shameless, bottom rung metal pitched at the lowest common denominator and carry as much intellectual depth as the Sharkanado franchise. Awful, revolting, unpleasant and capable of making Evil Scarecrow look like Neurosis. And we hate ourselves for liking them.