In what must rank as one of THE most leftfield festival announcements ever covered in these pages – and one we definitely did NOT! see coming – ‘Big Four’ thrash legends Anthrax have been confirmed to headline next July’s tenth anniversary edition of the Steelhouse festival.

In a shock guaranteed to blow the COVIDwebs off the top of the mountain, it has been confirmed that Scott Ian and co will ‘Bring The Noise’ on the Saturday (24 July). And, as if that wasn’t enough of a shock, organizers have also confirmed that special guests will be Northern Irish punk-metal pioneers Therapy?.

Traditionally seen as a “classic” rock festival, this latest announcement sees Steelhouse definitely taking things to a whole new level, not least in the volume stakes!

The latest announcement compliments the raft of acts already carried over from this year’s abandoned mountaintop bill, which include Phil Campbell And The Bastard Sons, H.E.A.T and perennial favourites The Quireboys and Those Damn Crows, alongside the like of Kris Barras, Raveneye, Mason Hill, Florence Black, Collateral, Matt Mitchell & The Coldhearts, Revival Black, Empyre and The Howling Tides.

Early bird tickets for Steelhouse, which takes place over the weekend of 23 – 25 July at Hafod-y-Dafal, outside Ebbw Vale, are on sale now. 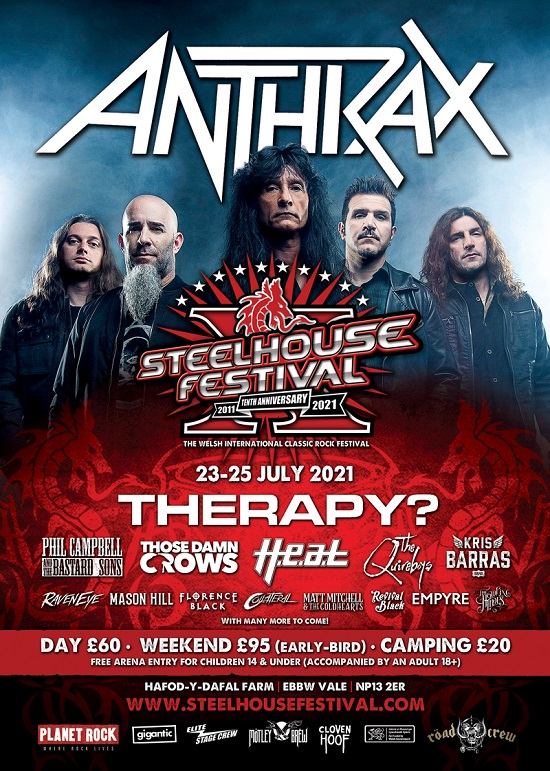