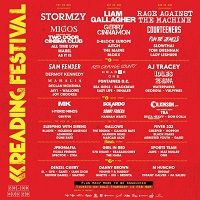 The question as to whether Reading and Leeds still holds any relevance for the worlds of rock, punk and metal rages on each year but one thing is generally for sure – the festival generally doesn’t pull in the kinds of bands your Über Rockin’ contingent will champion.

That said, the existence of a so-called ‘Rock Day’ has long been an integral part of the Reading and Leeds Festivals, and with the release of the 2020 line-up rock fans’ interest is certainly piqued with the addition of Rage Against The Machine as one of the headliners (marking their first UK appearances since headlining Download Festival back in 2010). That in mind, we thought it best to scour the line-up and point out some of the best and brightest acts appearing this summer.

So, outside of the rock-specific day things are pretty bare on the ground these days for getting your dose of heavier riffing. Still, some traditions to persist, as with The Pit stage stacking itself with thundering punk and hardcore bands. Sure, with over a decade behind them Gallows don’t particularly qualify as an up-and-coming act, but the band are still very welcome in their return after a quiet few years following the release of ‘Desolation Sounds’ back in 2015. By all accounts, last year’s Slam Dunk appearance showed the band were still on furious form, and we can hope this headline spot in The Pit spells potential for a new record to surface in 2020.

Another summer, another chance for The Bronx to take the weekend. Preposterously reliable when it comes to putting on incendiary performances, The Bronx probably aren’t a band you’ll be gagging to see popping up on line-ups in 2020 (having spent the past few years on the circuit), but nonetheless always go down a storm wherever they go.

As above! Cancer Bats are one of hardcore’s hardest working bands – no mean feat – and promise to level tents wherever they go. It’s a bit sad to see another summer go by with the band relegated to a smaller tent stage, but we can’t deny the atmosphere in those tents is always electric when the band get to unleashing the meaty riffs they have stored in their arsenal.

Rage Against The Machine

Headliners of the ‘rock’ day, the sheer level of excitement surrounding the return of Rage Against The Machine is already setting the rock and metal worlds alight. Twitter exploded this morning with responses (both good and bad), but there’s no denying that in the modern political climate a band like Rage Against The Machine can certainly mop up (if they can avoid talking about drones, at least). Their first UK performances in ten years, eyes will be on RATM to show they still have the fire in their bellies to pull out a blinding performance and go beyond being just another 90s act cashing in on their legacies.

Few bands (if any) in the rock spectrum have made a bigger impact than IDLES in the past couple years. Going from selling out 150 capacity rooms to filling Alexandra Palace months in advance of their shows in just a two-year run, IDLES have skyrocketed to the top of the UK rock scene and even managed to replicate such success overseas. With a socio-political message and a sense of righteousness borne right from the heart of punk, IDLES make perfect sense playing alongside Rage Against The Machine.

The return of Creeper after a year-long absence has helped to reinvigorate the enormous buzz the band had already cultivated thus far in their career. Coming off the back of a new record (due in March) and headline tour, it’s again a little sad to see Creeper relegated to a tent (as opposed to their main stage appearance back in 2018) but nonetheless something we’d be looking forward to seeing this summer.

Back in 2018 Ho99o9 were announced as main support for The Prodigy, all but confirming their status as the latest act to blend the rock world with genres outside its immediate sphere. With the loss of Keith Flint such an appointment becomes more poignant, with eyes looking to Ho99o9 to continue bridging the gaps between rock and mainstream culture, their unique brand of trap style hip-hop and hardcore punk sure to melt a few faces in The Pit.

Alternative metal in the truest sense of the word, Black Peaks’ mixture of prog and post-hardcore has marked them as one of the most unique bands in the modern metal canon. Last year turned out to be a bit stop-start for the band with vocalist Will Gardener taken out of commission for many live dates throughout the year, but that hasn’t taken away from the fact that the band are still considering a true tour de force both on record and in the live setting. If their fiery Download performance last year is anything to go by, Peaks are ready to take the world by storm when they return this year.

Though still somewhat thin on the ground at the moment (particularly when it comes to matters of representation), there’s still plenty of opportunities for the Reading/Leeds line-up to grow and expand yet, with this just being an introductory glance at the line-up. Keep your eyes peeled to see who else will make the cut for the 2020 event, and on Über Rock for honest appraisals of what such bookings might mean for rock/metal/punk in the mainstream in 2020!