Twelve more bands have been added to the bill for this summer’s Bloodstock festival.

Leading the charge are Swedish circus metallers Avatar, who will be seeking to make up for the disappointment of the cancellation of this month’s ÜK tour by returning to Catton Park, where they will be appearing on the Sophie Lancaster stage on the Friday. Also performing on the Sophie stage that day will be US metalcore squad Thrown Into Exile.

Saturday’s Sophie bill sees the addition of Pupil Slicer, who themselves head out on the road with Rolo Tomassi next month, and hardcore/crossover newcomers Cage Fight, who feature members of TesseracT and Eths in their ranks. Sunday’s diverse Sophie action will be augmented by Ill Nino, Guilt Trip, Skarlett Riot and Desert Storm.

Over on the main Ronnie James Dio stage, Saturday’s action will be kicked off by Danish death metallers Baest, while Vended will get the pit started on the Sunday. Swedish doomsters Sorceror and industrial metalheads Red Method have been added to Friday’s main stage bill.

There is some bad news however, as Phil Anselmo & The Illegals will no longer be appearing, following the cancellation of their entire European tour.

Bloodstock takes place at Catton Hall, Derbyshire, over the weekend of 11 – 14 August. Tickets are available by clicking on the link at the top of the page. 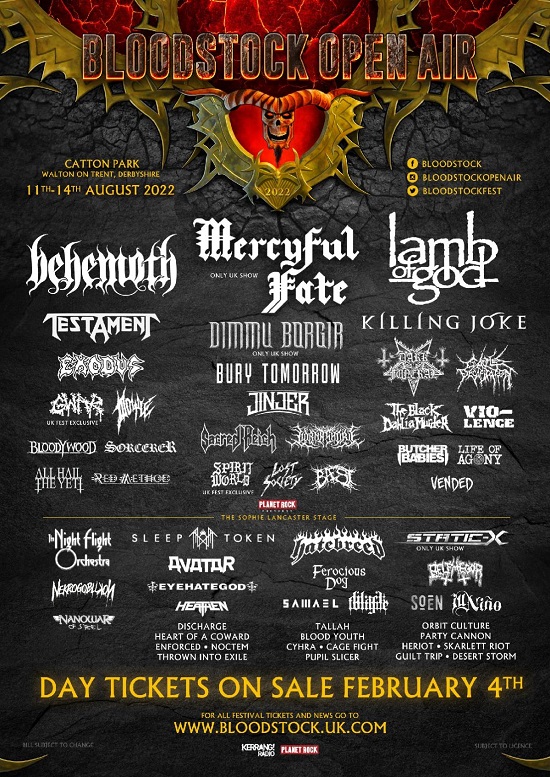