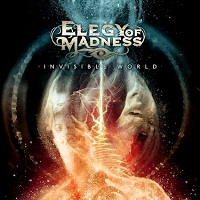 Symphonic metal is one of my absolute favourite genres. To my mind, few genres can match the intensity and passion that is inherent to symphonic. Obviously, I’m not saying that other genres can’t be intense or deep, simply that symphonic speaks to me on a deep level. The operatic vocal style combined with the big orchestral, or at least orchestral inspired, music makes for an experience that feels much bigger than one’s self. This is what makes symphonic special to me. With that groundwork laid let’s see how Elegy Of Madness does with ‘Invisible World’.

At first, I was a little confused with the musical style. There seems to be a little bit of a disconnected from track to track about the style. Some tracks have a folk influence, others have a middle eastern like flair, while others have a futuristic electronica influence. All of these elements combine very well with the more traditional sounds we expect from symphonic metal within their individual tracks but going from track to track it can feel a little disconnected. It is somewhat like a variety pack of candy. You get a little of a lot of different things but once I was used to it I found it was a decent way to keep the album feeling fresh instead of feeling repetitive, at least musically.

Lyrically, there were more than a few times I thought things got a little too repetitive for my tastes. I get it that a chorus is usually repeated throughout a song but here they were short and repeated more often than I would have expected. It is almost as if they constructed the song much like you would a pop song but that type of catchy repetition of lyrics felt out of place in this style of music. However, the delivery of these lyrics makes up for a lot of my issues. The lead vocals are beautiful and at times they are nicely contrasted with a harsh growled male vocal that leaves little to be desired. There is nothing negative that can be said about the vocals. They are perfect.

‘Invisible World’ is released on 24 January. You can get your copy HERE.