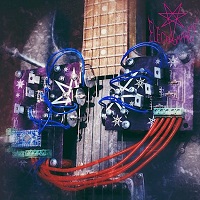 At which point do you finally consider us to be living in the future? Is it vending machines selling underwear in Japan? Voice activated assistants in every home? Self-driving cars? Or is it this – robots playing black metal?! No, it’s not your tinnitus playing up; I really did say that. But before you start screaming the word “gimmick” at me, let me tell you a little about how ‘Robot Black Metal’ came into being…

Electromancy is the brainchild of Satyra, who was diagnosed with Lyme Disease in 2018 which left him physically unable to play instruments anymore. But instead of just giving up there and then, he spent his time slowly crafting robot musicians to be able to bring his continued musical energy to life. The lyrics are naturally pretty dark, as one would expect from a black metal release with a significant focus on Satyra’s struggles with illness, physical disability and the fragility of mortality.

These themes are delivered by the robotic playing of some seriously nasty riffs and drum rhythms, which are more intricate than perhaps might be possible if played by a human.

The result is something that is fast and chaotic with layers of different rhythms to produce this piece of terrifyingly complex music. To top this off, the void left by the lack of bass is filled with an instrument fashioned from a length of PVC pipe which somewhat resembles a didgeridoo. This fills that void with an ominous drone that creates a profoundly haunting atmosphere to the music. Overall this provides a pretty raw and unique experience in the original track ‘The Spark’ and results in something that is hard to tear yourself away from.

The only issue is that this leaves you wanting more (or maybe that’s the point?) as the only other track on this EP is a cover of Drakthrone’s ‘Transylvanian Hunger’ which is most likely the first time that you’ll have heard Darkthrone being performed by robots – and they fucking nail it in my opinion! But will there be more? Only time will tell, I guess. But regardless, ‘Robot Black Metal’ is a unique raw experience that you really must check out and is a real testament to the tenaciousness of Satyra that deserves to be noticed!