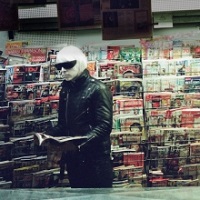 These days, bands attempting to recreate the sound of bands and scenes with their heyday in the past are more and more common, whether trying to recapture a feel-good era of the past or having slightly darker tinges to their music, such as Drab Majesty do here. Sounding like a heavy mix of The Cure, Depeche Mode and the Pet Shop Boys, there’s a lot to be said for so many acts that have attempted similar and failed, by simply imitating their heroes instead of emulating them. Drab Majesty, however, seem to have the balance just right.

While their influences are clear, the fact that the band have actually carved out their own version, successfully, instead of sounding like yet another reproduction of the aforementioned bands is certainly to their credit. The album definitely has the feel of a concrete sound while not repeating ideas, as too many others have done in the past in an attempt or fixation on finding themselves. It’s perhaps on the likes of single ‘Oxytocin’ (recently featured in our Singles Club) that The Cure influence comes out more than on some of the other tracks, with the earlier portion of the album being more orientated towards the 80’s alt-electro side of their work.

There are no real downsides to this album. It’s an excellent piece of work, with strong harmonies, brimful of melody, created with what feels like a strong sense of storytelling – for me, the best way of creating an album such as this. This release is in keeping with their previous effort, so any prior fans will certainly not be disappointed nor in any way anything other than happy with this release.

From a production point of view as much as from a musician point of view, this is a quality release, which could well be the one to propel them towards the stardom that surely beckons them, when they are capable of creating such piece of art as this. I can see them having major mainstream appeal, as well as to those who are much more inclined to the less light side of life and music, meaning their potential for growth is a lot larger than some of their contemporaries.

This has to be amongst the best of the post-punk/alternative albums that will be released this year.

‘Modern Mirror’ is released on Friday (12 July). You can get your copy HERE.