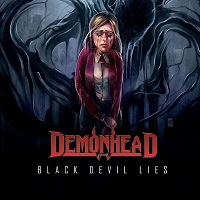 While musicians, like fans and writers and fans such as ourselves, may find ourselves isolated from one another in a way unprecedented in history, the ability of the music itself to travel across international boundaries, breaking rules and curfews, is equally unprecedented, thanks to the wonders of the worldwide web meaning that we can access anything anywhere in the Überverse at any time, with the only risk being catching some damn fine tuneage that may not have come our way otherwise.

Such an example is this, the second album from Aussie groove metallers Demonhead. OK, it found it’s way to ÜRHQ a bit before this dreaded lockdown, but we’ve blasting the death decks practically non-stop since BoJo and his rancid little sidekicks finally grew a pair and forced us to remain indoors and turn the collective volume levels up to Downing Street annoying levels, so the massive pile of CDs in the corner of the office is slowly getting whittled down to a more manageable size…

Demonhead do exactly what their name suggests – and that is play good old-fashioned, no holds barred, in your face (and aural cortexes) heavy freakin’ metal. And, they do so extremely well, I have to admit. From the slow build of opener ‘Against The Grain’, with its snarling, defiant vocal and rambunctious riff, this Melbourne mob concentrate on the job in hand, as they put their heads down and barge their way out of your speakers with the fury of a rabid dingo, grabbing you by the balls and forcing you to listen to their brand of no-nonsense metal.

What also strikes about ‘Black Devil Lies’ is how fresh and alive it sounds, as if most of it has been laid down live with little if any overdubbing and feck-all studio trickery to spoil the rawness of the sound. Each and every song pounds and pumps with pure unbridled energy, each of the four performances complementing each other perfectly, aided by a production which, as hinted, adds nothing where nothing more is needed but rather concentrates on drawing out the sheer power of the individual and collective performances.

‘Black Devil Lies’ is the sort of album that reminds me why I started listening to heavy metal in the first place. It’s old school with a fresh, modern vibrancy that enervates and makes it impossible for you to resist tapping your feet and resist the urge to haul your weary middle-aged arse off the sofa and headbang around the living room like a 13-year old who’s had one too may Sherbet Dips!