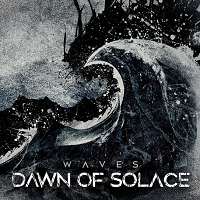 The brainchild of prolific Finnish musician Tuomas Saukkonen, Dawn of Solace represents a solo project departing from his various other outputs including Before the Dawn and Wolfheart. He is responsible for the majority of the work on offer within Dawn of Solace, with a handful of other musicians   stepping in as required. Initially the project was put on hiatus following the debut ‘The Darkness’ in 2006. This was to allow Saukkonen to focus on other projects. However, during 2019 it was announced that he was working on new material that would fit the Dawn of Solace output. The eight tracks on offer here are the sum of that work and represent a sophomore solo release.

The initial single release ‘Lead Wings’ opens proceedings and offers up an even paced melodic guitar hook drawing the listener in. The layers build upon this melody line and as the texture thickens out the track takes on a mid-tempo drive, with elements of doom and gothic metal mixed with a new wave type melody the theme for the album is firmly set. As mentioned, the layers are gradually introduced, once the track is in full flow with the vocals sitting above the mix there are lots of elements to unpack and keep the listener hooked in.

Current lead single ‘Ashes’ picks up seamlessly from the opening track. It continues on with the same melody driven new wave/gothic esque vibe. However, the overdriven guitars highlight a more doom laced tempo then the previous track and overlays a heavier sense of darkness lending greater weight to the music.  When the guitar solo kicks in the mix opens out and with the use of effects grants a sense of sweeping space allowing the guitar work to take centre stage.

The heavy yet engaging melodic driven style exemplified from the opening two tracks is the order of the day throughout ‘Waves’. Even though there is little deviation from this style, there is nothing stagnant about the eight tracks on offer. There are a number of standout moments to be found aside from the current singles. Notably, ‘Silence’ with its wide sweeping sound and catchy chorus sections. ‘Tuli’ which builds upon a chugging doom like guitar riff and continues to build and layer into a majestically thick textured composition that proceeds to a piano led fade out creating a grand epic in the centre of the album.  The penultimate track, ‘Choice’, is the most up beat in terms of tempo on the album and boasts not only the melodic drive prevalent throughout the album but also a catchy as hell guitar hook intro and string pad layers creating a thick textured wall of sound. The dynamics of the track ebb and flow and it fully draws the listener in. It throws out one final high note before the closing track ‘Ghost’ dials the emotive delivery back into a reflective mood with its piano led composition.

There’s a lot to enjoy within a relatively short time on ‘Waves’. Saukkonen has certainly delivered a highly engaging album that showcases his technical abilities as both composer and musician. Those already familiar with his work will undoubtedly see this as fine addition to his catalogue. For anyone looking for something a little different from their normal listening either doom or melodic metal there’s much here that will satisfy and perhaps open new genres for others.