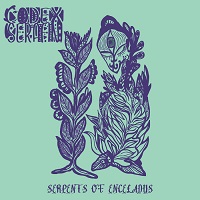 It’s no secret to those who know me that I do love a bit of weird music. Almost anything that makes you go a bit “huh…?” I am absolutely all over and will give it a fair shake before it gets added to my go-to music list or not. So, when I get an email that starts with “If you would like a bit of mind-bending, sax driven heavy psychedelic prog jams in your life”, then you are absolutely speaking my language right there and most certainly have my attention.

Codex Serafini, in their own words, are a Saturnian psych band hailing from Enceladus, that have crash landed on Earth, specifically Brighton here in the UK and have decided to spread their otherwordly music in the hopes that it reaches your ears.

So, to get down to the nitty gritty in more earth-like terms, this is a single song EP, split into five distinct movements; it clocks in at roughly 15 minutes, so it’s a fairly quick listen on the whole. Starting off with ‘Liber’ as a very minimal sounding and somewhat tribal drums and droning guitar with ethereal vocals before the sax chimes in for a short while and then returning to the minimal sound and heavily FX driven vocals.

The first thing I am getting some really strong vibes about is that this really reminds me of some of Pink Floyd’s early work, more specifically ‘Set the Controls for the Heart of the Sun”. Second track is ‘Cronus’ which focuses more on the dreamy big soundscapes that combine both the psychedelic vocals and jazzy sax playing, it works tremendously together and oddly also reminds me a bit of Shpongle (Electronic trip-hop artist). ‘Cronus’ eventually moves into ‘Janus’ which comes off as the EP’s bridge to it’s crescendo with more aggressive and shouty vocals, which build tension onwards to ‘Fountains of Enceladus’, which drops back to more soundscape work.

‘Fountains of Enceladus’ sees the guitars and drums repeating the same routine which works as a foundation as the vocals and sax provide sweeping, ghostlike melodies over the top. And finally the EP plays on into it’s final movement, ‘Speaking in Tongues’ which reverts back to the more Pink Floyd-esque drum, bass and guitar work. The vocals and sax continue to provide a haunting wall of sound before building in intensity and steadily getting heavier as we move onto the end of the EP.

Codex Serafini have put together a small collection of music here which is altogether bizarre, haunting and a pretty bloody interesting listen. If anything, I would encourage you to listen to this with a decent pair of headphones on, in a comfortable chair, with closed eyes and let it take you on a journey. If you’re into weird music, then this is definitely something worth checking out.