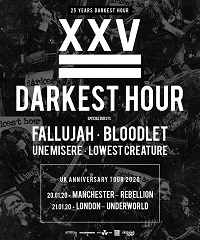 Twenty-five years is a bloody long time for a band to be together but that’s what Darkest Hour are celebrating in this latest tour, and with them they bring four other bands in support of this including a favourite of mine, Fallujah. Manchester is one of two dates they’re playing in the Über Kingdom as part of a European tour throughout multiple countries, as part of this review I also get to have a sit down with Mike from Darkest Hour and a chat with him about how the tours going, what sort of challenges a band goes through spanning 25 years, and any possible future plans.

Despite the doors being pushed back a bit due to some delays, Lowest Creature kick off on time, sadly not many people here yet but it’s an oddly early gig for a Monday at least. Coming straight out with some Thrash metal which wouldn’t be too out of place in the Floridian heyday of Thrash, in spite of this, the only member of the band that appears to be doing any real movement is the singer. I’m grabbed at this point to interview Mike from Darkest Hour so I’ve got to miss the rest of their set.

Second on is Iceland’s Une Misère, starting with a very dark and atmospheric intro track, their singer looks eager to scream at the audience. They kick into their first song and this is some ANGRY stuff, the guitars and bass are absolutely thunderous and can be felt rumbling through the floor. Honestly these guys sound absolutely fantastic and have the on stage presence to match, even the bass comes through fantastically which is a fresh change from the often barely audible low rumble many bands like this have.

Bloodlet kick off slightly delayed with a slow, dirty, sludge metal style song, and again it sounds pretty bloody good – whoever’s doing the sound for this show is doing a damn fine job with the balance! The vocals for this, despite being unclean, have a definite southern American drawl which accents the music well.

At this point the venue is starting to fill up a bit which is good to see, clearly there are some fans of Bloodlet in the crowd that are going a bit crackers down the front and singing along. Admittedly this sort of music isn’t really my sort of thing, these guys are definitely solid writers and wouldn’t be doing it as long as they have if a log of people didn’t clearly enjoy it.

Fallujah are sounding massive tonight; they’re very well known in the tech metal scene and for good reason. Mixing intricate polyrhythms with sweeping atmospheric melodies, they’re a band that scratches many itches in that they’re heavy enough for people who want face melting brutality and melodic enough for people who want memorable hooks. Honestly, the double bass pedal work on their drummer is straight up obscene, and its presence absolutely hammers your gut.

Having seen these guys a few times before, I somewhat knew what to expect and they’re every bit as good as the last few times, they’re definitely a band you should check out if you love your Technical stuff. Every part of the set is expertly executed and incredibly tight and their particular style stands to appeal to a lot of different types of metalhead, give them a listen, great band.

Darkest Hour really aren’t messing around here, genuinely what an incredible sounding band they are right from the word go. The guitars are crisp, the bass is loud and clear yet thunderous, the drums are right where they need to be in the overall sound and vocals come right over the top – this sort of balance is great.

The crowd is absolutely loving this already, plenty of movement and raised arms to the beat of the rhythm, Darkest Hour are well-honed in their act, no messing around, just straight forward metal, no gimmicks. Honestly the more this show goes on, I can’t help but be absolutely enamoured with the sound they’ve got going, it really ranks amongst the best sounding I’ve ever seen at this venue and the best bit is that they’ve done this without being overpoweringly loud.

Due to the delay at the start, the knock on effect meant that they started their set slightly late which has cut out some of the audience participation in between songs but I don’t think the crowd is really bothered by this because Darkest Hour are just blasting through their set and they’re clearly loving every minute. As per my chat with Mike earlier, the set is an anthology set full of deep cuts into their incredibly long career so new and old fans alike are getting a great amount of exposure to their back catalogue.

Overall, tonight’s gig has been a really fantastic smattering of different types of bands, with Darkest Hour really showing everyone how it’s done. Hopefully we’ll see them return to the UK sometime in the near future in support of a new album, and I can absolutely guarantee you that I’ll be there for it!