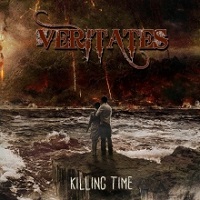 I have always found that power metal typically falls into two different categories. You have the classic power metal of the ‘80s or you have modern. I always find it hard to put into words the difference in the sound it is just one of those you know it when you hear it kind of things. However, visually there is the same line. That classic ‘80s style brings to mind visions of men in spandex while modern tends to have a Viking theme.

I think power metal, more than most genres, tends to fall into some type of cliché. When I saw that Veritates was branding themselves as power metal without the clichés I had to give them a chance. I have always loved power metal but I have felt that is could grow up a little and not rely so much on the gimmicks. So how did they do?

The musical style here defiantly follows the more classic 80s style it has that classic tone we all expect but with a little bit more of a heavy darkness to it. There is a very high production value that comes through wonderfully in every track. I would say that I don’t think this album is clear cut power metal instead it straddles the line between power metal and heavy metal leaning more toward the power metal side. I even get some hints of Metallica in a few of the tracks. This gives the whole album a nice flavor that lets it stand out while still feeling familiar.

I don’t really have too much to say about the vocals. If you think good ‘80s heavy metal, you will probably be pretty close. The vocal style is perfect for the music they are playing. I simply have nothing to say negative about it.

While most of the album is very consistent, I did find track three, ‘Jerusalem Syndrome’ rather strange. Don’t get me wrong it is a good song too it just seems to break from the style of rest of the album at first I thought it was a poor call but the more I listened to the album now I think it is a nice way to mix up the album and add a little variety.

It is nice to hear some good old fashion power/heavy metal without the gimmicks that we have been dealing with all these years. This is a great album that will fit in well with any collection. Spandex not required.