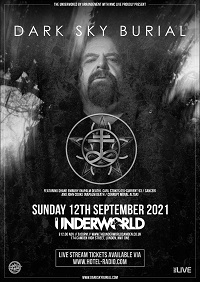 One glimmer of hope when the whole world went to shit was the increase in the number of online live streams. While things are a little bit more normal and venues can open their doors once more, there are some bands who opt to run a live stream of their physical gigs which is dead handy when you’re a bit far removed from the venue. And it’s because of this that I’m able to catch the first ever live performance for Dark Sky Burial, the new industrial project from Napalm Death’s Shane Embury, at The Underworld in Camden from the relative comfort of my Northern Fortress of Solitude (patent pending).

Now, this is less of a gig in the traditional sense; instead, I would say it’s more of a musical experience. If you had come into this gig expecting something in a similar vein to Napalm Death you would have been confused and perhaps a bit disappointed. Rather, we’re treated to an hour long, non-stop rendition of Shane Embury reaching out to the fringes of his creativity to produce something that is completely different. The set-up is pretty simple, with the whole band seated and the interaction with the crowd is minimal (I’m not sure how large the crowd was from this camera angle but there is the odd whoop to be heard).

It’s an unsettling experience of eerie industrial sounds accompanied by slightly erratic drumming that is interjected by spoken word passages laden with an echo effect. It’s certainly something far from what you might expect, but it most definitely pushes the realms of creativity. It feels almost dystopian in the way it comes across, and this is enforced by the deadpan delivery of the performance. Even at the end of the show there’s just a very brief thank you as Shane and the band leave the stage. The whole feel of this show came as a complete surprise to me, but then the whole album was launched as a complete surprise, so perhaps I should have expected the unexpected!

While it was something that is very much outside of my usual sphere of influence, it’s been great to be able to experience this piece of musical expressionism from the comfort of my own home. I do feel that I need to go back through and listen to ‘Vincit Qui Se Vincit’ in full to reinforce what I’ve experienced this evening and appreciate the deeper meaning behind these dark and unnerving tracks. But all in all, for the first ever live performance of this cathartic release of a musical project, it’s been an interesting experience that will stick with me for a while!