Words by DJ Monk. Photographs by The Dark Queen.

It’s supposed to be the middle of Spring, fer feck sake, but I swear that it’s the coldest night of the year so far as DQ and I brave the elements and head across Belfast into the city’s historic cultural heartland, where the annual Cathedral Quarter Arts Festival is in full swing, and the main attraction this particular night is the return of those maestros of the Chicago-style blooze revival, Daddy Long Legs, who have rammed this cornerstone venue to the rafters for a night of raucous rock’n’roll. 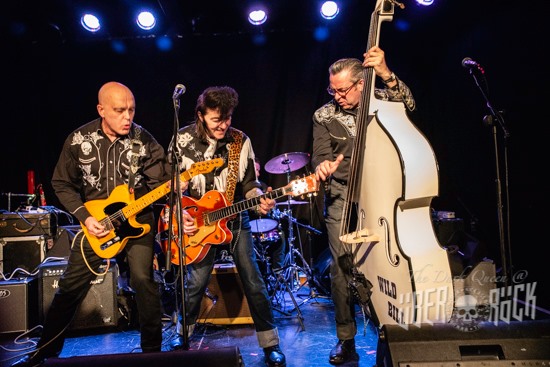 Appropriately, given the eclectic nature of the festival, it’s an eclectic bill, with local rockabilly heroes The Sabrejets tasked with warming up the crowd – and, to be honest, it doesn’t take them very long to do just that.  These guys do things old school: twin guitars, upright double bass, and no-nonsense rock ‘n’ roll all the way, it’s tight, energetic and confident in equal measures, delivered with a cocksure attitude as big as frontman Brian Young’s ridiculously over-sized quiff! They don’t stray too far from the traditional rock ‘n’ roll formula with the likes of ‘Wild For Kicks’, ‘Tennessee Flat Top Bop’, ‘Lone Wolf Blues’ (which they dedicate to the late Freddie Starr), ‘Redneck Blues’ and the raucous ‘Hell Yeah!’, while also proving, not for the first time tonight, that they’re not living in the past with ‘You’re Gonna Miss Me’ from their forthcoming new album, all of which get at least one couple dancing in the aisles and earn them a deserved encore, which comes in the form of a hyper-charged rendition of ‘I Fought The Law’. 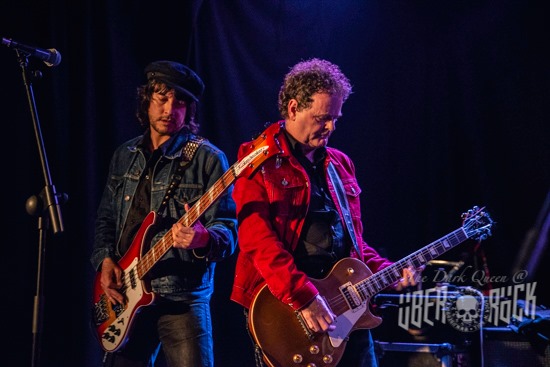 There’s something of a change in both mood and tempo with Protex, another group of Norn iron veterans who are probably the closest this little corner of the Überverse came to wannabe glunk superheroes who never quite were there (and I don’t mean that in any kind of derogatory way). Their clever use of interchanging lead vocals and big vocal harmonies accentuates their punky riffs and power pop sensibilities, while their well-crafted melodies are the main focus, the tasty hooks backed up with solid rhythms.

Again proving that they’re not happy to live on past glories, they follow a dive right back to 1987, with ’Place In Your Heart’, by bringing things smack up to date with ‘Can’t Figure You Out’ from their forthcoming new album. In between the generation-spanning set, which sees Aidan Murtagh reminisce about the heady days of the Harp Bar (the now demolished one that once stood next door to the venue not the pale tourist-trap imitation across the street), there are a couple of needless if appreciated covers, but these do not detract from the overall impact of the set, which is highlighted by the clear reinvigoration displayed by Gordie Walker behind the kit. 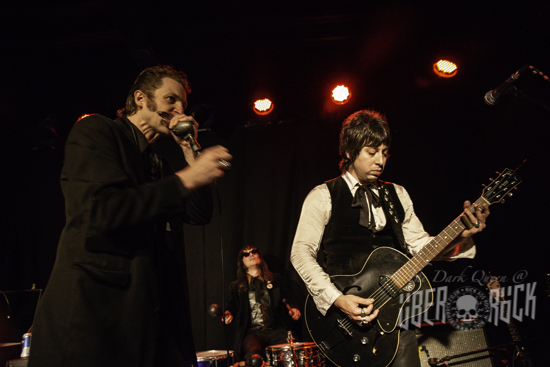 Now, most bands would celebrate the release of their latest album with a hometown show, but as it happens Daddy Long Legs are on the other side of the Atlantic and here in Belfast as new release ‘Lowdown Ways’ hits the shelves across the Überverse. But, there’s no sense of the homesick blues for these Noo Yawkers as they take to the stage, the theme from ‘Ghost Riders’ blasting from the speakers as the crush at the bar slowly gravitates towards the centre of attention for the rest of the evening’s proceedings. Despite the paucity of their stage set up, one thing is immediately obvious: these three guys like to play it LOUD as, with the thump of a big fat bass drum, the lonesome twang of an acoustic guitar and the heady swirl of a vibrato-filled harp, it’s time to “get down and get with it”.

With Josh Styles playing his stripped back kit (just a bass, floor tom, snare and a single cymbal) in a rather unique style – just one stick, his other hand holding a maraca, which he uses to batter the life out of the tom – the trio produce a great big, phat, greasy noise that sounds like the devil himself has wandered out of the depths of Hades and brought his whiskey-soaked blooze to the back streets of Belfast, where he is greeted by wolf whistles of appreciation and a hollering for more of the same. 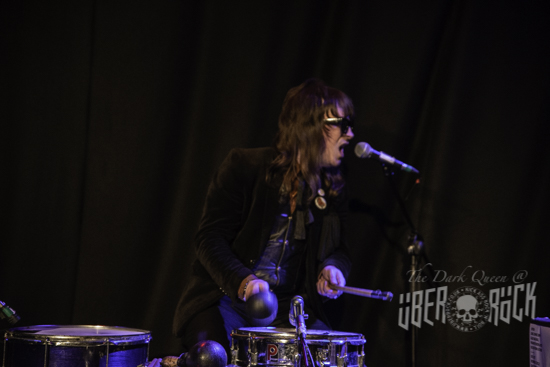 With ‘Lowdown Ways’ getting a sumptuous airing, ‘Glad Rag Ball’ is followed by a riotous rendition of single ‘Morning Noon And Night’, while ‘Back Door Fool’ sounds much less like a copycat than it does on the album, the atmosphere is electric, the crowd stoked as the band meet every expectation and then deliver more on every level, their raw, primal energy channelled through amps marked “filth” and “fury”.

With Brian Hurd (aka Daddy)’s distorted vocal and hugely charismatic stage mannerisms – a sort of cross between Bill Haley, a youthful Elvis, a young Jason Ringenberg and an energetic Tom Waits – and Murat Aktürk’s bottom-heavy stripped out geetar, this is music to which to stomp huge size 11 holes in the venue’s shiny wooden floor. The pace is breathless, as emphasized when they try to leave the stage after just shy of an hour of unbridled energy, only to be called back on after just a few seconds, and when they finally quit both they, the audience and the room are all dripping in sweat, before we head back out into the cold night air safe in the knowledge that this evening we have watched something both memorable and revelatory. 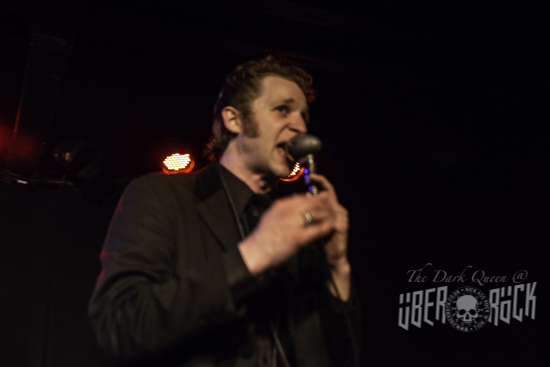 This was a show which demonstrated what happens when people who believe in rock ‘n’ roll at its most primal deliver it to a crowd of people who want the same to absorb and enrapture them. Daddy Long Legs did just that.

Daddy Long Legs’ UK tour continues tomorrow (Tuesday 14 May) at The Cluny in Newcastle Upon Tyne and then as follows: