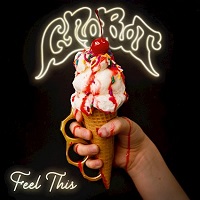 From the opening track to the closing notes there is not one tiny moment of boredom in this album.  There are so many influences exposed on this, from grunge to heavy metal to solid rock: they’re all here…

The opener, ‘Electrified’, does just that, shocking you into listening from the opening vocal, the rhythm section of Tim Peugh (bass) and Dan Ryan (drums) hammer you ears into submission – you will listen to it! Even though the vocals of Brandon Yeagley sit well above the mix, it is the drumming and bass that had me sitting up listening and the guitar riff of Chris Bishop is just as noticeable, especially towards the breakdown.  Breathless start that would be a good opener on any tour gig.

‘Dizzy’ is much heavier and darker than the first track but still carried by the drums and bass that will have everyone in the pit head nodding in time to the beat. However, there seem to be a deeper meaning to the lyrics about relationship issues (a bit timely given the recent celebrity mega trial). ‘Set You Free’ is a bit quieter with an airy guitar opener and Yeagly’s vocal almost a Capella in the first verse, and once again the song changes direction to have more of a alt-metal feel to it.

‘Better Times is just a good old fashioned rock track with all the instrumentation supporting the vocals of Yeagley before a seriously bluesy harmonica solo carries toward the breakdown and outro, again driven by the bass and drums before a scintillating guitar solo carries the outro. Just to slow things down a bit, the grungier ‘Golden’ is probably my favourite track on the album, just because it gives you the chance to catch your breath and is actually a tribute to the late Chris Cornell and it is a very suitable one too.

You’d be forgiven for thinking that ‘Without Wings’ was a ballad for the first 30 seconds, then – BAM, it goes up by six gears and 6000 decibels to take a quick punt at anti-heroes.  It rattles through from beginning to end, and then ends with the gentle guitar riff that started the track.

‘Living On The Streets’ has some serious AC/DC influences in the opening riff, which continues throughout the track; but it is still carried by the rhythm section and backing vocals right to the breakdown again. With only one track at four minutes 36 seconds (‘Without Wings’) there is literally no time to draw breath…

‘Into The Fire’ is still as strong as the other tracks but is much heavier and has a serious bass line groove going on. ‘Dance With The Dead’ carries the groove through the track supported by a catchy guitar riff, but the tongue in cheek lyrics will raise a smile! 180 seconds of hook and riff that will have any audience joining in with it.

‘Holy Ghost’ is another heavier track but still seriously grungy in origin. Even so the drum tracking is really well set in the mix: you definitely know its there but it is not overpowering the whole track; that is no mean feat given the way Ryan appears to be battering his kit into submission.

The opening guitar riff of ‘Never Break Me’ will have you thinking “where is that from?” before they invert it for the rest of the track and the moment is gone, I’m still trying to think about it. If I say ‘My Sharona’ (The Knack), let me know if I’m wrong. Closer ‘Staring Straight Into The Sun’ has a mix of down and dirty guitar riffage with some nicely sung vocals, then midway through the track again kicks up several gears to the guitar section that again will have you asking “where did this come from?” before it gets a bit more airy on the outro.  Quite a variety for one track.

If you like Crobot you’ll like this. If you’ve never heard of Crobot you should check this out and get to a venue soon to see them on tour. It’s a very good album that will be on repeat for a while on my Spotify list anyway.