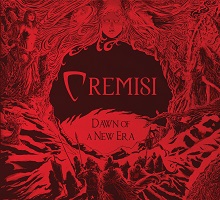 Italy seems to be producing symphonic metal bands faster than Ferrari can build cars, and the latest to come off the production line are this quintet from Bologna. The band’s location, and this, their debut, album’s title are both highly appropriate, as the former was at the centre of the Italian Renaissance, which the latter in turn takes as its theme, from the great artworks of Leonardo Da Vinci to the voyages of discovery of Cristoforo Colombo, via the Black Death and the infamous witch hunts of the era.

To be honest, the album does not live up to its title, for it does not herald a new age for the symphonic metal genre; it does, however, contain all of its constituent elements, from the huge melodies and soaring solos to the bombastic overall feel. What is does do differently, however, is its use of the symphonic elements: rather than the grandiose, multi-layered string arrangements which one perhaps has come to expect from bands playing in this mien, Cremisi appropriately reflect the era from which they draw their inspiration, with the frequent use of medieval instrumentation to counterpoint the more aggressive elements of their sound, as evinced in opening track, ‘The Black Death’, where lutes and harpsichords playfully intermingle with the crunching guitar riffs.

Another surprising element of this opus is Davide Tomazzoni’s vocal style: operatic it most definitely is not; he has a register which is much lower than many other singers in the genre, but that is not to deny its effectiveness as, given the Renaissance theme of everything that Cremisi do, the result echoes that of the troubadours of the era, wandering from castle to castle, village to village, singing the tales of bravado of both historic and contemporary events and folk heroes rather than an OTT Verdi-esque interpretation of same.

‘Dawn Of A New Era’ is a well-crafted album, with a natural flow to it that so many releases, especially in the symphonic metal field, do not possess. It moves with grace and poise, showing that the musicians involved obviously have learned from the lessons of the past in how to create an overall effect, with recurring themes and moments: the sea shanty vibe of ‘Captain’s Log’, for example, is repeated at the beginning of ‘In The Name Of The Lord’, which in turn also employs the more traditional instruments used in the aforementioned ‘The Black Death’, and again revisited during ‘The Battle Of Lepanto’, while ‘The Hanged Man’ and ‘On The Moon’ bring the overall feel full circle with their massive baroque elements. The result is, therefore, an extremely cohesive and coherent musical entity.

‘Dawn Of A New Era’ hardly will set the world on fire – or, as I said, herald a new era from the symphonic metal genre – but it is a worthy offering, with some really good ideas and sparkling performances.