FESTIVAL NEWS: KK Downing to “boss” it at Bloodstock 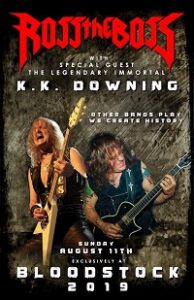 Former Judas Priest guitarist KK Downing is to make his first live appearance in almost ten years, when he makes a guest appearance with Ross The Boss at this year’s Bloodstock festival on Sunday 11 August.

It will be Downing’s first public performance since 17 October 2009, when Judas Priest played the Loud Park Festival in Chiba City, Japan.

Downing said of his return to live action after almost a decade:

“I’m really delighted and really looking forward to sharing the stage with Ross The Boss and saying hello to all our fans together. For me, as you know, it’s been far too long, so I sincerely hope to see as many familiar faces as possible at this truly unique event. True metal for true metal fans at the UK’s truest metal festival. United we stand!”