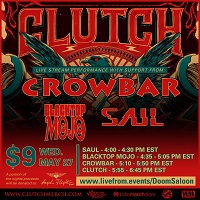 It’s time for another lockdown live-stream gig, which I guess is almost like the nicorette of the music world. It may go towards quelling the live music cravings but it’s still not quite the same! Nevertheless, here at ÜRHQ we’re continuing to make the best of what we can get, so I’ve been sent to the comfort of my own lounge to enjoy a gig with two bands I’m pretty familiar with, and another two who are completely new to me. Tonight is the aptly named “Doom Saloon” live event hosted by one of my favourites – Clutch, with support from Crowbar, Blacktop Mojo and Saul, all for the incredibly reasonable price of $9, which is a bit of a steal really!

Having covered a few of these events now, I’m starting to find a few advantages that make things slightly better and I like to focus on the positives! The bar is cheaper and always seems to have exactly what I fancy, the changeover times between sets is pretty short and pants are optional! Tonight’s show also has the added benefit that Clutch have listed some special edition merchandise for the show from which the profits will go to their road crew who are currently unable to work, so definitely a worthy cause!

Anyway, onto the show where Saul, hailing from Iowa, open this Wednesday night event. Taking full advantage of the streaming set-up, Saul get pretty lavish with the lighting and visual effects. Switching between camera angles throughout the set, and at times showing all four angles on screen means that it’s difficult to miss any part of their set. Certainly beats being stuck behind that inevitable tall guy at a normal gig, that’s for sure! Having never come across Saul before, I’ve been pretty impressed with their technicality and polyrhythmic riffs which is something I didn’t expect to see in support of Clutch. Certainly not a bad way to get warmed up for the rest of the night but now it’s time for a short break while we switch over for Blacktop Mojo. 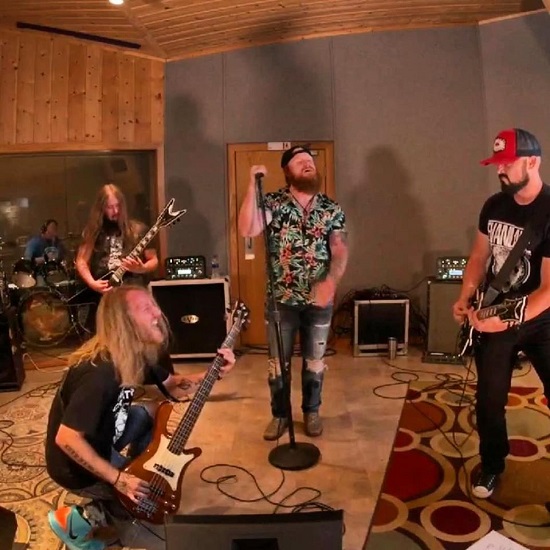 A pre-show interview with the band highlights that they are riding the wave of a new, ÜR-approved EP, titled ‘Static’, so I would expect that we will hear some new tracks from this tonight. When their stream starts, it’s instantly obvious that this is a very different set-up to the previous band. We’re greeted to a light and airy looking practice studio, with their drummer safely hidden behind a perspex screen. Is that for his protection, or the band’s? Who knows. This is definitely more the kind of thing I was expecting to see in a lineup alongside Clutch though. Blacktop Mojo have a pretty fantastic set full of energetic southern rock numbers that cause vocalist, Matt, to dance about all over this studio. There’s fantastic bluesy guitar solos galore, leaving plenty to be excited about and being a fantastic warm-up for the headline act tonight. But after this burst of upbeat energy, it’s time to turn that tempo way down and that heaviness all the way up to 11 because it’s time for the mighty Crowbar!

Wasting very little time for flamboyance or theatrics, Kirk and the boys launch straight into their non-nonsense set of sludgy riffs. As those familiar will probably expect, there’s not so much in the way of movement, in fact the band are pretty stoic in their performance. However, musically this is possibly one of the better Crowbar sets that I’ve seen! Kirk’s instantly gravelly voice is absolutely on point tonight, so it’s no surprise that he’s provided those vocals on Jasta’s latest album. Churning through a setlist of their more popular tracks, including ‘Planets Collide’, ‘The Lasting Dose’ and ‘Existence is Punishment’ this has been a pretty solid performance from Crowbar. Each track has been played at near album perfection and it’s been a great performance, but to me it feels that there’s something missing. It’s like the Crowbar performance doesn’t quite translate as well as a live stream, it just lacks a bit of the atmosphere that I’m used to. 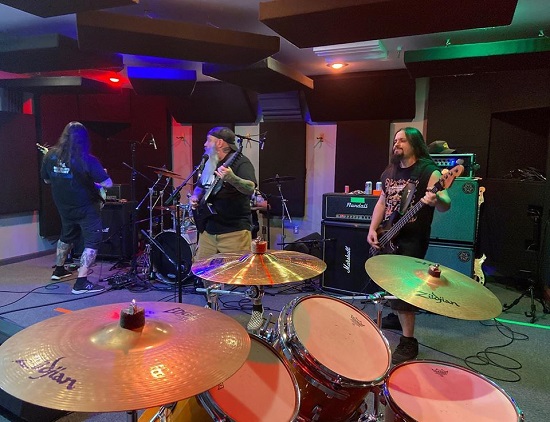 But now it’s time for the main event, the orchestrators of tonight’s performance, the mighty Clutch. Immediately it’s a huge change in energy from Crowbar’s set, with Neil Fallon being full of energy as we’ve come to expect! He manages to make this feel like a regular stage show with his frequent interactions with a camera in a way that breaks the 4th wall harder than Wayne’s World. There are some unfortunate interruptions to the video, causing some interesting freezes, however this is an extremely well-engineered stream that has separated the audio track from the video which means that the audio is uninterrupted throughout. Let’s face it, the audio is the more important thing after all!

The setlist is full of some of my favourites and many fan favourites to boot! The early part of the set sees some extremely well performed renditions of ‘Weird Times’, ‘The Regulator’ and ‘Firebirds’. The latter is followed by an unexpected confession from Neil that the reason that Clutch have several songs about muscle cars is to compensate for the fact that he drives a Prius! Of course, a Clutch set would not be complete without ‘Electric Worry’ which on this occasion is dedicated to a bar in Alaska which is showing this entire gig on the big screen on the bar.

This is possibly one of the more varied setlists that I’ve seen Clutch perform, with most albums getting represented with just one song in the setlist. The only exception to this is the latest album ‘Book of Bad Decisions’ which manages to bag two spots in the set list, including the final song of the night ‘In Walks Barbarella’. It’s been a great evening of music and easily worth the $9 “entry” fee, that’s for sure. One thing that was a shame to see was the amount of people trying to push illegal re-streams of the gig: it’s like the online gig equivalent of ticket touting, I guess. If there was ever a time to front up money to support artists, then it is now more than ever! Especially if there is going to be a live music scene for us to get back to when all this blows over, so make sure you do what you can to support artists where you can!