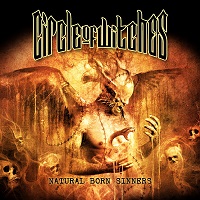 I do love an album that picks a theme and explores this throughout the album. In fact some of my favourite albums fit into the category of so-called ‘concept albums’. So, when I picked up a copy of this latest release from Italian heavy metal band Circle Of Witches, I was interested to see whether this could join some of those coveted albums…

Circle Of Witches have been on the scene since 2004 and over the last 15 years have built up a bit of a name for themselves as an exciting blend of classic heavy metal with the likes of Motörhead, Judas Priest and Black Sabbath quoted as influences. Their last effort, ‘Rock of Evil’, released in 2014, was well received because of its very heavy Motörhead influences which resulted in some real fast paced headbanging tunes.

‘Natural Born Sinners’ is the third full-length album release for the four-piece from Salerno, a city steeped in history that is a stone throw from the life of Naples and Pompeii. So, it is not a huge surprise that historical elements form a huge part of the theme of this album but have no fear, it has nothing to do with that Shakespeare play set in Naples – the Tempest.

The first thing that stood out to me on this album is the subtle change in vocal style since the previous album. On this album the vocals have taken on a very similar style to Powerwolf which works very well with the album’s overarching theme of ‘Riot’. This has included various rebel figures from throughout history, religion and anthropology being explored over the course of the album. Musically I would say that this album starts as very Judas Priest influenced album, but definitely draws in some elements of the likes of Powerwolf towards the back end of the album when it starts to pull in epic sections of Latin chanting to really add to the atmosphere.

The album gets off to a strong start with the fast and heavy ‘Tongue of Misery’ which takes a swipe at the hypocrisy of religion and how intellect and scepticism are the only weapons to combat this. Instantly you can hear the Powerful influence in the vocal style of Mario Bove here which is accompanied by some solid guitar and rhythm work.

Seamlessly, this transitions into ‘The Black House’ which opens with a riff that is reminiscent of Priest’s ‘You’ve Got Another Thing Comin’‘. This track is dedicated to Anton LaVey’s Church of Satan and covers the Nine Statements that are the cornerstone of modern Satanic philosophy. The next track is a doomier number and is named after 16th Century Italian philosopher, Giordano Bruno, who was burned alive by the Catholic Church at the turn of the 17th Century. The layered vocals in this song really build on the doom atmosphere of this song with the subtle backing vocals adding depth to the chorus.

Interestingly, ‘First Born Sinner’ acts as a bit of a summary that ties all of the album’s themes together by quoting lyrical sections of the other tracks. And I’m sure I don’t have to tell you who the First Born Sinner, the source of free will and choice, is hinted to be… it’s every metalhead’s favourite – Lucifer.

‘Your Predator’ is significantly faster paced than the rest of the tracks of the album, and possibly one of my favourites. This one has an interesting theme to it: ‘a wicked man who struggles for freedom from his sexual mistress’ – sounds like a good Friday night to me! They’ve even managed to slyly drop in a bass solo from Tony Clarabella. To lead into the penultimate track ‘Death to the Inquisitor’ the tone is laid down by the vocal solo ‘Deus Vult’ (‘God Wills It’). This phrase was the battle cry of the Knights of the first Crusades and is conveyed in this track with choral Latin chanting that really builds up the feeling of the next track which deals with the persecution of suspected witches under the Inquisition.

Overall, musically this album is not going to set the world on fire, there’s nothing new here that we haven’t seen before. In general, it’s a bit like the bastard child of Judas Priest and Powerwolf, and that’s certainly no bad thing for me! However I do think it stands out more with its themes and lyrical content in that it had a similar effect on me as Sabaton invoke – I spent half of my time listening to this album reading up on the stories behind the themes that I kept forgetting to write this review! It will be interesting to see whether the next album from Circle Of Witches is another ambitious concept album or whether a return to the faster Motörhead-like sound will be on the cards instead. Only time will tell…

‘Natural Born Sinners’ is out now. You can get your copy HERE.