Cheap Trick – ‘In Another World’ (BMG) 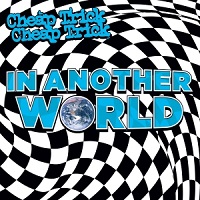 After nigh on half a century of creating well-crafted pop rock classics, you could forgive any band for resting on their laurels and just sticking their needle into that well-worn groove. But then, Cheap Trick are not, and never have been, just any band. Yes, they produce songs which are immediately identifiable as being theirs, but there’s always that extra special little sparkle and twinkle to what they do… and that is exemplified yet again on this, their remarkable 20th studio album.

Yes, I may say that the Tricksters produce songs which are immediately identifiable as being them, but they are also a band who have never been afraid to mix up styles, their integration of glam rock and punk making them one of the progenitors of the “glunk” movement which we ourselves categorized at the origin of the site, while at the same time combining elements of psychedelia, pop punk (a genre in which, again, they were very much ahead of their time) and good old-fashioned rock ‘n’ roll, all delivered with affection and passion.

Opener ‘The Summer Looks Good On You’, ‘Quit Waking Me Up’ and current single ‘Boys & Girls & Rock N Roll’ are typical, energetic Tricked-up power pop classics, the former the perfect soundtrack for barbies on the beach, guaranteed to have you air-guitaring through the dunes, the second a hazy, indie-pop groove of the sort multiple Madchester bands would have sold their guitars to achieve, the latter a hard rhythm ’n’ blues stonker very much in the vein of classic Stones. In between these, we have the psychedelic vibe of ‘Another World’, a sound reprised later on the lilting ‘Norwegian Wood’-era Beatles-style ‘So It Goes’, while ‘Final Days’ possesses an affectionately cheeky Bolan-meets-Slade garage glam slither to its DM-clad stomp. ‘Passing Through’ and ‘Here’s Looking At You’ both possess punky verve while ‘Here’s Looking At You’ is one of those tried-and-tested power pop slam dunkers that just puts an inane grin on your face, before, in true Cheapster style, they reprise ‘Another World’, giving it a completely different, anarcho-garage punk makeover.

As I said, Cheap Trick have always possessed a sound that makes them instantly identifiable. But, by the same token, they’ve also always retained that ability to question your preconceptions and wonder just what the fuck you’re listening to. Forty-seven years into their career, they have not lost either of their qualities: in fact, if anything, they are continuing to push their own boundaries – and ours. In doing so, with ‘In Another World’ they have proven that they have proven, yet again, that while the vagaries of the music business may change around them, nothing changes when it comes to producing quality rock ‘n’ roll albums – and especially ones that have your reaching for the repeat button before the last embers of the final track have died in your battered speakers…