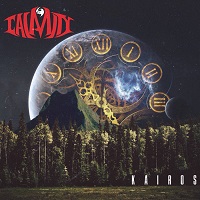 At first glance, ‘Kairos’ seems to be just another thrash album. Opener ‘Killer Vibes’ is a party-anthem that’s as enthusiastic as it is predictable, with lyrics about mosh pits and guitar solos as fast-paced as an F1 car. It’s all pretty standard stuff and there’s nothing to suggest that Calamity will do much to carve their own niche, but then they follow it up with ‘Guerreros’ and things start to get more involving. They don’t do anything particularly ground-breaking, but on this one they sing in Spanish and suddenly, a comparatively run-of-the-mill album starts to develop its own character.

Granted, it’s not like we’ve never heard Spanish-language metal before, but simply by singing in their native tongue, Calamity sound way more authentic. Rather than being yet-another basement thrash band yearning for the chance to support Death Angel, they’re a distinctive and individual group. It helps that ‘Guerreros’ is an up-tempo rager and even for gringos like us who haven’t the faintest idea what the Costa Del Sol waiters who say “me cago en tu paella” mean, this one is an attention-grabber.

From here, the Puerto Rican four-piece predominantly sing in English, with Spanish raising its head above the parapet occasionally. There are a few decent tracks in here; ‘The Truth’ is an early highlight with its upbeat energy and good time atmosphere, while the title track is an antagonistic little foot-stomper. There’s nothing here that leaves you thinking that the future of thrash has emerged, but cuts like ‘Overuled’ (sic) are enjoyable enough carne y papas metal to keep the circles spinning.

That said, you do find yourself pining for another ‘Guerreros’ to crop up, but the only other Spanish-language track to be found is ‘El Vacio.’ This one is a Metallica-style “semi ballad,” that starts off as a tender and heartfelt effort, but then speeds up around three minutes in. It’s not a bad attempt, but it doesn’t quite land even if it does show them stretching their wings somewhat.

‘The Change’ really lets the side down by being quite dull, while the closing ‘Handlebar’ is either brilliant or cringe-inducing, depending on how strong you like your cheese. It’s a song about wild nights on the town, beer chugging and fun times, but also sounds like it was written on a Sunday afternoon by guys that just watched Wayne’s World.

In short, ‘Kairos’ is a patchy but decent enough sophomore from these lads. ‘Guerreros’ is their defining moment and it casts a shadow over the other eight tracks, but it’s not a bad way to spend three quarters of an hour. You do find yourself wishing they’d written more Spanish-language songs though, because here Calamity are at their most convincing and sound like they could be torch bearers.