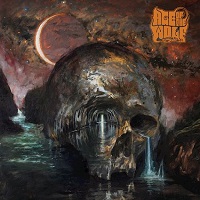 Being a newer band, I was previously unaware of Costa Rica’s Age Of The Wolf, although a nod at stoner or fuzz is usually a good thing for me. I had a quick listen through their previous self-titled EP to get a feel for their music first, noting that while raw, there were definitely some positives to draw from it. So noted, it was time for the first playthrough of ‘Ouroboric Trances’.

Straight away, it’s noticeable that they do not stick to one vocal style. We have some that are more melodic to the music, with some rougher vocals coming in to add emphasis in certain parts, in a manner that actually sits quite well if taken more in a sludge manner. Musically, there are points of doom, sludge and almost a heavier end of post-metal feel on a couple of occasions, with influences point towards the likes of Black Sabbath, Crowbar and High on Fire in fairly equal measure at varying times.

Third track ‘Goliath’ is one of the standouts from this release, starting off in a more post-metal feel that actually accentuates the feel of the sludgier tracks alongside it, such as ‘Unholy’ or ‘The Crimson Penitence’, while there is generally a sonic landscape tuned more towards the groove inspired backing to be found in parts of each track, adding depth to the songs. There are not many guitar solos which stick in my memory from the listens through, so this is perhaps something that may be addressed and added in on a later release. ‘Witches Gallows’ has a somewhat different feel with the introduction of an instrumental with a violin performing where you would expect the vocals, leading to what is actually a very well thought out and crafted track.

The only real complaint I have is that although the different feels do sit quite well together, the variances in the sound show that the band is still in its formative stages in terms of songwriting, though there is a definitely good standard of writing shown in each of the tracks within this release. I would expect this to iron itself out within the next release or two, as the band establish quite where their footing is and play more to that, though whether they head more towards post-metal or stick to their Sludge sound will be interesting to see, as both sides are performed well enough that they could comfortably head in either direction.

Overall, it’s a release I would have no hesitation in recommending to other people, though it is certainly for those more interested in their heavy end, within the post-metal and sludge spheres, with a slight overlap towards the most classical stoner sound at times that fits well with either of the other two, with some groove to be sound in the bassline and guitars at times during various tracks, especially evident in penultimate song, ‘Bloodrage’.