Brian Cottrill – ‘Through The Keyhole’ (Self-Released) 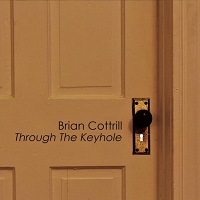 Brian Cottrill quite rightly can be called a veteran of the west Virginia music scene – in fact, it is an epithet he proudly uses himself. He will (hopefully) be already known to UR readers, as for the past five years he has been the frontman and primary songwriter with the fantastic The Grey Agents, whose second album, ‘Last Generation’, blew me away with its natural, organic energy when it was released this time last year. That same energy is very obviously present on this, Cottrill’s debut solo album, featuring songs covering the entire gamut of his 34 years as a writer and performer.

‘Through The Keyhole’ is very much steeped in the American blue-collar songwriting tradition of the likes of Neil Young, Tom Petty, John Mellencamp and Bruce Springsteen, to namecheck just a few reference points that immediately spring to mind. By complete contrast with his work with The Grey Agents, the ten songs offered here are Cottrill stripping things down to their most basic and rawest form – just himself with an acoustic guitar and a harmonica – and by and large recorded live in the studio, without any overdubs: “I didn’t give myself a lot of takes to make this record…. If I couldn’t get a good track after a few takes, I moved on to something else,” he explains in the cover note which accompanied the CD (which, due to the vagaries of the postal system, took a full three weeks from its released date to reach ÜRHQ).

Like all good songwriters, Cottrill draws very much from personal experience, his family – ‘Erica’ is about his daughter and Dylan-referencing ‘Sammie Lee’ about his parents, to whom he has dedicated the album – observations on random incidents in life (‘Lace’/’Uncertain Keyhole Jangle’) or things he sees on the news (‘When The Fire Comes’), the tainting power of social media (‘Remember My Name’) and even the history of his native Virginia: the surprisingly upbeat, almost humorous. ‘The Murder Farm’ is about a series of notorious murders that happened in 1931.

‘Through The Keyhole’ is an album that sounds fresh and vibrant, and offers a valuable insight into the mind of its creator. It puts his other work into context, and it would be interesting to see one or two of the songs – maybe ‘Lace’, ‘Lost And Forgotten’ or ‘Gates Of Venus’ (the only song with added bass and drums) adapted for the full band format.