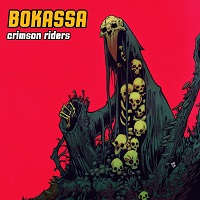 Cleverly released on the day that they open for the mighty Metallica at Twickenham Stadium, ‘Crimson Riders’ is the second album from the self-styled kings of the Norwegian stoner-punk scene. And it’s not hard to see why Bokassa would seek to lay claim to that crown, as this is a collection of eight tracks of controlled anarchy, fueled with a visceral acidity that immediately grabs you by the balls and forces you to pay attention, while simultaneously moving your neck muscles into an almost involuntary moshing action.

Put quite simply, ‘Crimson Riders’ is an album that pulls at every emotional fibre in your being, slamming you against the wall with its vicious vibrancy before picking you up off the floor with the tenderest of touches, leaning down into your face and snarling “I ain’t finished with you yet, sunshine”.  It’s raw, it’s angry, it’s fierce, it’s a drunken bar room brawl set to the most insane soundtrack – and also highly complex, with multiple layers lurking beneath the surface of any initial examination, with enough going on within its corpus to keep ‘Ducky’ Mallard busy for half a dozen episodes of ‘NCIS’.

It’s also fresh and vibrant, reflecting the fact that the entire recording process, from beginning to end, took just a week. Catchy hooks bounce and vibrate, vocals alternately scream and tear at your soul yet also embrace you with the deftest of embraces, cellos and saxophones appear from out of nowhere to entrance you, and question your senses, while the rhythms remain tightly focused, occasionally breaking out to meet a meandering melody before returning to the main path.

If you want some reference points, imagine ‘Reign In Blood’ era Slayer jamming with Mastodon before Hinds and co lost the plot, while Nick Oliveri sits laughing maniacally on top of a speaker stack wondering what stoned state he has got himself into.

‘Crimson Riders’ is an album that will leave you lying on the floor, kicking and screaming – and begging for more. But, before you hit that repeat button make sure that booze cupboard is well stocked, as this is one helluva session which will extend well beyond its first, second or even 15th listen. Seriously, it is that beautifully brutal. A very serious contender in the album of the year stakes in just a few months’ time.