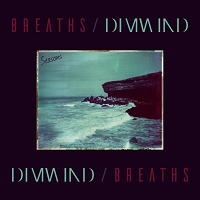 So, one thing that I’ve seen pop up in terms of newer bands getting their music out to the wider world, is split EPs, which in itself is an interesting concept where two different bands “share” an EP release on the same label which as far as I can tell, can save on production costs but also helps some cross-genre appeal for audiences who may not have been aware of the other band.

Dimwind, a post-metal/post-rock outfit from Gothenburg, Sweden and Breaths, a blackgaze/doomgaze solo-project from Richmond, Virginia, US have combined their releases into the ‘Seasons’ EP.

The tracklist is just two tracks, one from each band but clocking in at 15:38 for Dimwind’s ‘Window Passed’ and 14:56 for Breaths’ ‘When Soft Voices Die’. One thing that draws my attention on this track is that Breaths have recruited Chad Kapper, vocalist of Frontierer, which I’m quite interested in.

So, the first track in is Dimwind and I do sometimes find it tough to properly talk through the ebbs and flows of generally more lengthy tracks as I like but the initial few minutes of instrumental riffage are engrossing to say the least, and I do love me some riffy prog. It reminds me quite a fair bit of the older Scale The Summit tracks from the likes of ‘The Migration’ era where each instrument is trying to fill a gap in the sound and produce a fuller experience.

Long extended sections throughout the middle section, melancholic and sombre but with some fantastic melodies to go along with it before moving to more solid chugging which steadily increases to a more frantic playout which slowly begins to sound almost bordering on black metal with its smashing blast beats and tremolo style picking. The whole track has definitely been thoughtfully put together with no feeling of “this is too much” on each component part, a great first half of the EP.

Secondly, we have Breaths’ part – and good god, what a shift in gears. The first half has a nice quiet playout, and the second half just immediately kicks in straight with the black metal part kicking you straight in the face. Admittedly compared to Dimwind’s production, this sounds quite rough with the recording sounding a bit like it was done all at once in a small dark room… but I guess that’s kind of the ‘in’ thing with black metal isn’t it?

Dissonant chords and odd time signatures making themselves known a few minutes in and I kind of dig this sort of juxtaposition alongside the screamed vocals, the whole thing kind of keeps you on edge wondering where the next twist in all this will hit you out of nowhere. The flow of this song goes on all sorts of strange turns, the mid-point having a wonderfully pleasant atmospheric passage that couldn’t be further away from the start of the song but this sort of flow tends to keep it interesting.

No sooner did I get settled into the atmospheric passage, a sudden “slow down” sound effect plays and we are right back into the wailing synth and discordant guitar parts similar to the opening, Chad’s voice is unmistakable at this point if you’ve listened to any Frontierer prior to this. The outro has a pretty damn catchy riff as it plays out to a steadily quieter passage and despite not being super keen at the start, I’m pretty into it by the end!